Technical Brutal Death Metal masters Incinerate return with new album is called "Sacrilegivm". This new album is more promising, still complex as usual, and unmerciful brutality. The new album is planned to released on October 9th, 2020 via Comatose Music. Along with the anouncement they just released first track titled Lux In Tenebris you can stream here!

Statement of Comatose Music about this release:
Incinerate have returned with their long-awaited new album, ‘Sacrilegivm’! This is the sound of eternal war - no mercy, no peace, no surrender - only implacable hatred and limitless violence ‘til the end of time and beyond. Unfathomable brutality, technical complexity and the wild, dark magic of classic death metal entwine throughout eleven tracks that together deliver an unforgiving master class in musical extremity. The sirens are howling, the trumpets have been blown and on October 9th, ‘Sacrilegivm’ will be unleashed! 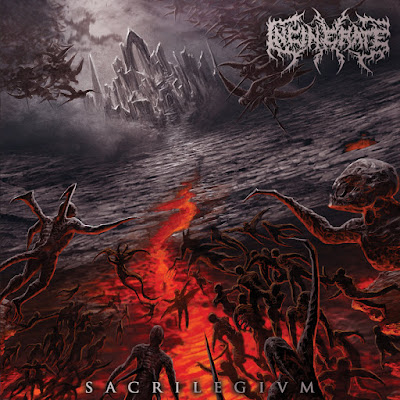 Tracklist:
1.Lux in Tenebris
2.Cast Out and Condemned
3.Trumpets of War
4.Thrown to the Fire
5.Holy Irreverence
6.Fallen is Your Kingdom
7.Fleeting Opulence
8.Inexorable
9.Absence of Divine Power
10.Cenotaph of Celestial Corpses
11.A Lamentation to the Fallen