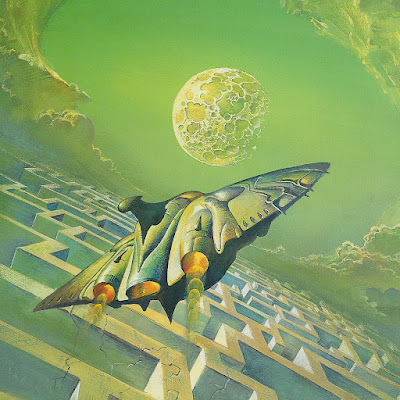 This split album opens with "Cosmic Dreams" by UK squad in Cryptic Shift, a series of fast and complex riffs is presented on this track, it's sci-fi Technical Death Metal with Thrash element deliver an extraordinary abilities from space which gives tremendous power beyond the capabilities of ordinary humans.

Next track is "Unbeing" from Replicant, New Jersey trio Technical Death Metal group producing riffs that are despicable and lecherous with pummeling drum and vicious vocal which penetrates the soul immersed in a dark atmosphere of restless, malaise, and rot.

Ohio Tech-Death outfit Inoculation continue the torture with the track titled "Xarthaneus", a new track of them that strike with tight riff, killer rhythm, and dual sick vocal will crush and hit you hardly so that make you fall headlong. A real step up both in terms of production and songwriting.

This spilt closed by track of three piece Denver Death Metallers Astral Tomb is called "Transcending From The Mortal Plane Guided By A Familiar Phantasm", a cavernous death metal song wrapped in a dark atmosphere that gives an evil, horror, and merciless magic that erases your consciousness in an instant time.

Overall this split album features excellent bands with killer tracks summed up in a great production. Strongly recommended for Death Metal maniacs. Don't skip this split album or you will live in regret.