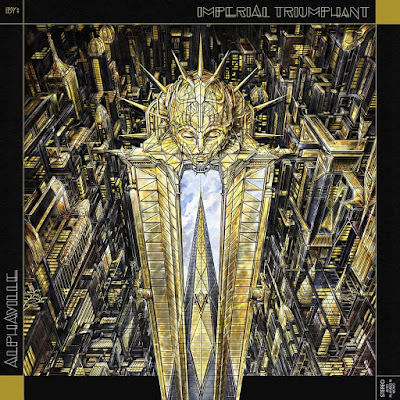 A complexity will not always cause bad stigma, burnout, or cause problems that are difficult to solve, but a complexity sometimes also contains a meaning or interest from someone, for example complex music not always make us dizzy because the structure that causes headaches but also cause a invaluable satisfaction, like music presented in Alphaville, the fourth album of the trio New York Avant-Garde/Progressive-Black/Death Metallers Imperial Triumphant that just released by Century Media Records.

Alphaville is the evolution of conceptual and musical improvements from their previous albums. Opened with Rotted Futues presents a tense dark atmosphere followed by a painful sound that strike the mind. Continued with track Excelsior and City Swine offer a fascinating sound of dissonance. Entering the fourth track Atomic Age to the seventh track The Greater Good, they raised the level of complexity that was stodgy as if we were taken to a journey to a foreign and silent dimension created by the band. The album was closed with 2 cover songs from Voivod and The Residents that were delivered amazingly as the last offerings at Alphaville.

Alphaville is an amazing album that become one of my favorite album of the year so far that make me drown and interested in enjoying all the complexity and noise that is created at the same time on this album.