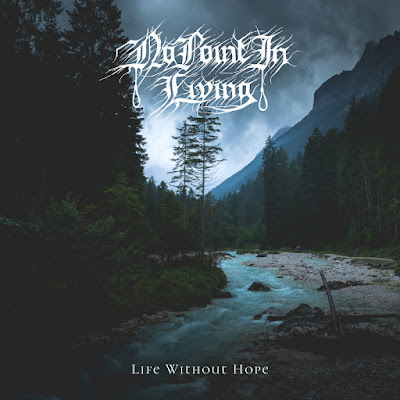 No Point In Living is Japanese one man Depressive Black Metal project that created by Yu (Yusuke Hasebe) in Sapparo, Hokkaido on 2015. As a solo project he is very prolific in songwriting, so far No Point In Living has released 19 albums and several EPs since its inception. Now in August 2020 they have just released their 20th album entitled "Life Without Hope".

In this new album they present music that is far different from the previous album, each song on this album is written more complex and aggressively, by combining Progressive and Technical, Black metal which is dark but cold, with a Death Metal approach.

Life Without Hope is an album with a dark musical structure and depressive vocals that will bring you in front of a mirror of life that makes you stare blankly into it, so that your soul will find a sense of sadness and despair until lost all hope in your life, like the title of this album that the band wants to declare. This album not recommend for DSBM fans, but if you like their music you should check it, it's strongly recommended for fans of Opeth, Shining, and Forgotten Tomb.