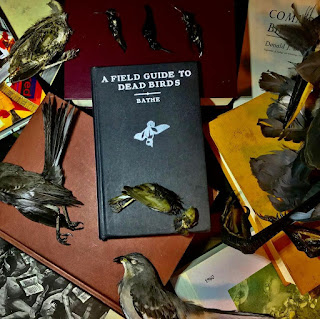 One more band with a weird musicality that I discover and listened to this year. Bathe, band that is still foreign and I just listened to the first time. They are 4 piece Dissonant Avant Garde Death Metal that formed on 2014 in Columbia, South Carolina. The band has relesed 3 album so far, Ornothopsieism in Seven Movements (2015), Migration Patterns (2017), and new album that just released this month is called A Field Guide To Dead Birds.

A weird music anestheize, torture, and destroy everything to create an inevitable catastrophe. They don't care whether you headbang or not, they want to make you suffer as you enjoy every sound and tone on this album. Vocal screams howling sadly, riffs and drums rolling like boulders falling off a cliff, hoarding and hitting whatever is in front of them. The weird dissonant music they created reminded me of bands such as Gorguts, Pyrrhon, Uzumaki, and another band in their genre.

Bathe managed to create an extraordinary experience in music, made a madness, weirdness, and courage to make a difference that will always be remembered by everyone who listens to this album, and I feel lucky have found them and enjoy their weird music that is crushing , so dark, and full of challenges. So if you need music that can made you crazy and drunken in the same time, this album I recommend for you.