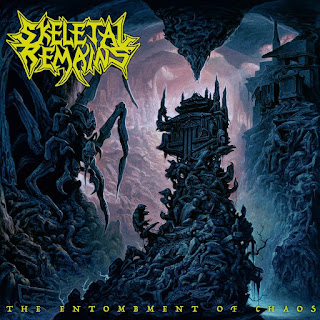 Californian Old School Death Metal hordes Skeletal Remains back to spread a horror terror through their new album is called The Entombment of Chaos that just released via Century Media Records.

The creepy nuances and the dark atmosphere describe how cruel this album is. The guitar strikes blindly like a beast chasing their prey, a drum smack to the head, devastating guitar riffs, clad guitar solos slashing and slicing like sharp blades, and ferocious vocal screams add to the torment for more flavor pain and misery. This is an album that brings us back to the glory days of Death metal in the past with a new spirit and modern sound packaging.

The Entombmemt of Chaos is a horrendous momentum, carrying a sacred message that reminds us that we are going to step into the cruel and merciless world of death metal. For those of you who are fans of aggressive Death Metal, with a strict music structure without further ado, this album for you.