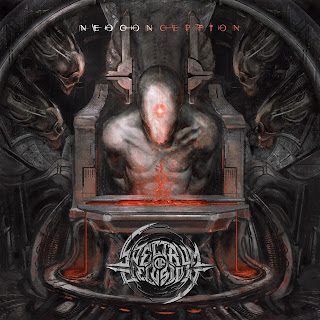 Dutch Technical Death Metal unit Spectrum Of Delusion just drop their sophomore album is called Neoconception via The Artisan Era. The band that was founded in 2013 previously released their debut album Esoteric Entity in 2017, if their debut album is an impressive album, their second album is a much more impressive and extraordinary improvement.

This album contains 13 track of astonishing Technical Death Metal music, sweet riffs torture from track to track, genius songwriting makes this album worthy of being juxtaposed with the big names in this genre. An enchanting melodic wrapped with a clever touch of Progressive Death is capable of shaking the minds of all who have checked this album. I know not everyone will easily enjoy the Technical Death Metal music they offer, but this album will make you think twice about ignoring it, believe me the music they offer is truly amazing. So don't hesitate to taste this album.

Neoconception is a great album that is neatly conceptualized by presenting dynamic tunes, complex but not boring, fast but not tiring. Beautiful music that will cast your mind in a strong, sturdy, and impressive imagination. Easily this album is one of my favorite album this year.