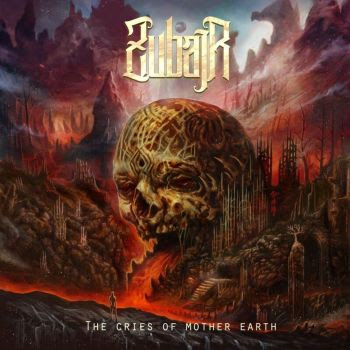 In recent years, the Indonesian scene has been dominated by Brutal Death Metal music, thus making the name of Indonesia known as a country that produces extraordinary talent for Brutal Death metal in Asia and the world. But besides the fame of Brutal Death Metal in Indonesia, there are other extraordinary talents who dare to play different and fresher music, one of them is a newcomer, Zubair who plays an astonishing Technical Death Metal music. This band managed to steal my attention since releasing several singles and in this month they have just released their debut album entitled "The Cries of Mother Earth".

This album opens with the dark and immersive track The Cries of Mother Earth, as if immersing us into a quiet dimension full of peace. And their attacks were continued on the tracks Absolute Justice, False Redemption, Destroy Conspiracy to the last track Makna Jiwa. The selection of beautiful tones seems to cut hearts and minds, stir up deepest emotions, and anestheize with elaborate but memorable plays. Great guitar solos in every track with sick vocal making this band can't underestimated.

Overall, this album presents a classy technical death metal music with astonishing melodic strains, which makes my attention fully focused on enjoying each track presented. For those of you Technical Melodic Death Metal lovers, please take a moment to check out this album. Zubair is a beautiful gems that appear seductively with the sparkle of their music.