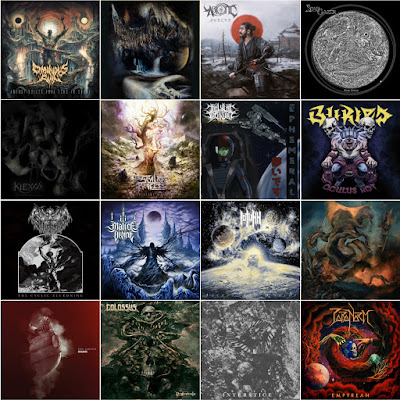 On this occasion I will make a recap of what has happened this February, of course there are many extraordinary moments when the release of good albums this month. After I have collected for one month, these are the albums that I think are very charming, I highly recommend you check them out. Okay without further ado here's the list

Ominous Ruin - Amidst Voices that Echo in Stone

They have evolved into deadly killing machines, from a tech / brutal background to a more focus on oriented death metal on their debut album. Flowing and dripping with discovery at every turn, they seamlessly weave technical elements with melodic and brutal flavors. With intense, fast and dissonant riffs, stunning solos,  dynamic fretted and fretless basses, punishing drums, and highly dynamic and unique vocals. Really promising material

Ad Nauseam - Imperative Imperceptible Impulse
They are come back and making something even more fresh in terms of composition, music structure and sound. From their hermitage, Ad Nauseam produced a very layered and complex musical pattern where each instrument was outstanding in its entirety. Both the concept of harmony and melody has created in this album brought out an eerie atmosphere that make me goosebumps. Great work and I must admit, this album is one of best album this year, undeniable!
Abiotic - Ikigai
What an incredible of this tech/prog death album. I think Ikigai is new level and improvement of their musicality. After a long absence without a new album, Abiotic is back with all their heart, with shredding solos, heavy riff, twists and turns all the way, tempo changes, intricate drum played, and sick guest spot. I guarantee this album will keep them at the forefront of your brain without a doubt.
StarGazer - Psychic Secretions
In this album, StarGazer creates something new that is more aggressive, but not eliminating their traditional sound. The Progressive and Avant-Garde elements that have been doubled into her sound over the years are fully featured, amplified and sculpted more perfectly. The composition of the album is so confusing, the tempo shift is reckless, the melody is special, and the mix of riffs that are different and unpredictable, all of which produce an astonishing effect. This album is arguably StarGazer's most fully realized album to this moment
Klexos - Apocryphal Parabolam
It's phenomenal album, super heavy and intricate dissonant tech death that merge with Progressive and Black metal element with twisted riffs that give you a vigorous kicking. This album feeding you more exhibits technicality and killing vocals that display a lot of harrowing dynamism as well, with quick tempos and uncertain groove that will fuck your mind and drown your soul in the same time.
The Scalar Process - Coagulative Matter
It is an extraordinary Tech-Death album, carried on with a burning and fiery spirit, exploring the various winding paths and alleys of the atmosphere, and leaving a lasting impression at the end of it all. Few albums can produce this kind of calm and execution, leave a lot of moods and also don't meander long enough to lose the moment, they remain aggressive without losing emotional value.
The Lylat Continuum - Ephemeral
This sensational album is a progressive metal concept that diffuse with proggy death metal with ambient psychedelic breaks, atmospheric, really interesting progressive rock elements. This epic music flows smoothly from track to track that bring you into space journey and covering moments of sheer brutality with pure euphoric passages. Damn weird and outstanding stuff that deserve getting big applause of listeners.
Buried - Oculus Rot
It's slap hardly and really kicking, they offer old-school brutal death metal with a unique modern, technical, and progressive twist, catchy riffs, cruel drumming, and colorful music grooves. A debut album that's hard to ignore.
Suffering Hour - The Cyclic Reckoning
A dark and evil aura emanates from this album with scattered dissonance full of chaos enveloped by a tense atmosphere. These records are an uninhibited, seething, gloomy form of negative emotion. A cosmic unorthodox Blackened Death metal attack that includes ideas about life and death, time loss, and grief that will punish you in the a maze of despair.
Malice Divine - Malice Divine
A dazzling debut album that presents dark and gloomy rhythms which are formulated in the form of Blackened Death metal with leaden atmosphere, slashing melodic, emotion-provoking harmonies, and some classic parts that immerse us in a deadly tomb.
Iotunn - Access All Worlds
This is an epic album, cinematic progressive death metal with sweet melodies, some atmospheric moment, catchy riffs, astonishing guitar solos, a beautiful blend of harsh, growls, and operatic clean vocals, that all sits part of their music. Really impressive.
Swampbeast - Seven Evils Spawned of Seven Heads
The fierce music that sows chaos and destroys the brain is slowly embodied in this album. You will get the torment of the Blackened Death Metal with the tempo slowed down and decreased as if making the battle spinning speed stronger. The unholy rumble of the guitar, which penetrates the headroom with riffs that drag in your face and poison your brain. What an album that will catch you!
The Amenta - Revelator
They have returned after a 7-year hiatus with a new album, combining maximalist Industrial Black Metal ballast, distracting cinematic ambient / noise textures, processed violins, terrifying acoustics, and circuit-twisted electronics into one unconformist, dissonant, dynamic Death Metal package, and torn apart electronically.
Colossus - Degenesis
The cruel music that blending fast and incisive riffs and elements of complex technicality with sheer heaviness that ready crush everything, the debut album from these bringers of destruction is worth to challenge your adrenaline
Knoll - Interstice
Dissonant? Technical? well, this album deliver high quality deathgrind, their music is full of chaotic tones, so experimental, wild vocal, with solid material. Music that is really brain-numbing and full of anger.
Paranorm - Empyrean
It's a glorious album, musically i think it's new wave of thrash metal that expertly combine elements of death metal, black metal, melodic, and progressive on their music. The riffs are catchy and sharp with biting sound, the song flows well from section to section with great production. This is a good debut album, and they are a band deserve more attention.