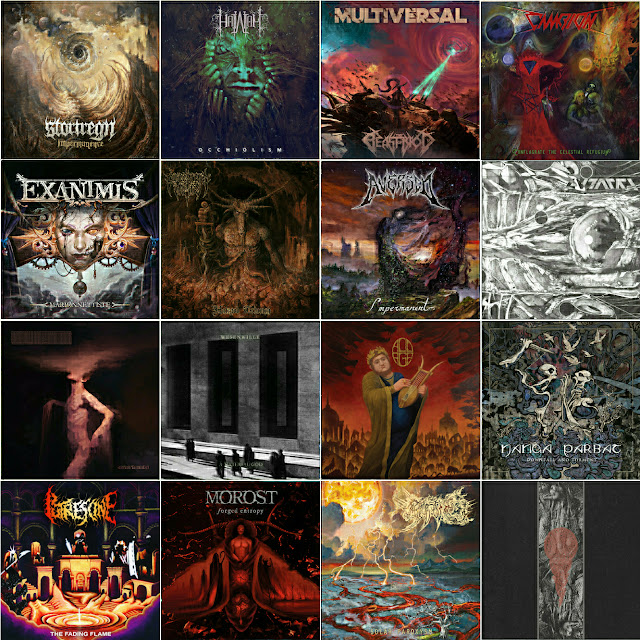 It's the end of the month, as usual I will share the albums that we think are quite attention-grabbing, okay without further ado, this is our list of the best albums of this month, worth checking out.

Hatalom - Occhiolism
This is one of the debut albums I've been waiting for a long time, I was happily surprised when they announced their new album at the start of the year. By exploring musicality that combining several elements from Black Metal, Melodic, Prog-Death and made more complex than their previous material. Canadian death metal is undeniable and indisputable always producing fresh music that is astonishing and memorable for a long time.
The Beast Of Nod - Multiversal
This album is more conceptualized than their previous albums, the exploration of tones and riffs from start to finish is mindblowing. The guitar is amazing with complex texture, full of stunning guitar solos, fantastic vocal, and layered sound. An album that easy catch me.
Cambion - Conflargate The Celestial Refugium
Damn, this album really give hard slaps. Death metal music with fast, intricate, and agressive riffs, chaotic guitar solos, strong old school vibes and blackened feel. It's a dirty, heavy, and vicious death metal album. Need more listen this beast album!
Exanimis - Marionnettiste
It is difficult to briefly describe what a shows were presented, suffice it to say that they were immensely gifted at playing such a magnificent and classy symphonic death metal with sweeping pianos, elite orchestral arrangements, choral reverberations, epic poetry, eerie moments, varied and complex riffs, captivating guitar solos, and a strong horror atmosphere in every song that is presented. Trully a brilliant album that surprising and amazing.
Creeping Fear - Hategod Triumph
French Death Metal group delivering damn good tones with a lot of massive riffs, horrible melody, agressive, fast and mercilessly as if giving no pause for us to breathe. Highly recomended!
Aversed - Impermanent
This is a prog death that I can really get, well executed in music with high energy. With crunchy guitar riffs, beautiful yet immersive melodies, blistering guitar solos, and the combination of strong growl vocals, harsh, and clean vocals that are emphatic from a female vocalist, make this album easy to receive on the ears and find space in the hearts of listeners. Really delicious and memorable music.
Autarkh - Form In Motion
It's a powerful and bold debut album that give something fresh for the listeners, a contemporary industrial blackened death metal with blistering guitar, pounding drums, varied vocals, and hard pulsating electronic vibes.
Blindfolded And Led To The Woods - Nightmare Withdrawals
Playing death metal at a high level, supported by great musical abilities, with the mix of Technical, Avant-Garde, Dissonant, Brutal, Mathcore, and Grindcore with a strange dose makes everything sound unstressed. An intricate and unique album makes us reach the climax of a gratification, it's like an ultra aggressive attack from another planet that will explosive your ear holes. Really sick album.
Wesenwille - II: A Material God
Their music has evolved more than ever before, with the mix of musical elements that are more colorful, making this album really show tremendous progress. The progressive, dissonant influence that blends with unrelenting black metal makes this record even stronger and will become the choice of main playlist in the next few years.
Acid Age - Semper Pessimus
It's a stunning album, Progressive death/thrash metal blend with technical and strong jazz influences. Lots of impressive guitar, amazing bass, varied vocal, great drum, interesting solos, and unique style. Love the production this whole album, killer stuff!
Nanga Parbat - Downfall and Torment
It's epic and tremendous prog-death album, in this album you will get death metal with heavy riffs, some strumming acoustic guitar, odd tempos, varied vocal style, stunning guitar solos, and some orchestra sections. Really sweet records
Putrescine - The Fading Flame
It's an interesting stuff, musically they play death metal with insane and bending riffs, dissonant and progressive, dark and bleak atmosphere, torturous vocal, also pummeling drumming.
Morost - Forged Entropy
A sweet blend of black metal and death metal that infused with progressive elements here and there, a little groove, and dark atmosphere. Quite entertaining
Mare Cognitum - Solar Paroxysm
A very emotional and captivating cosmic black metal album, full of a sharp and evocative imagination. The production is amazing, the performances are honest, and the songwriting is perfect. I literally love it.
Monte Penumbra - As Blades in the Firmament
This is a classy album for me, they present avant-garde black metal music with scandinavian feel, structure that is chaotic, dissonant, and noisy wrapped in deadly atmosphere and gloomy moments. Incredible and glorious.