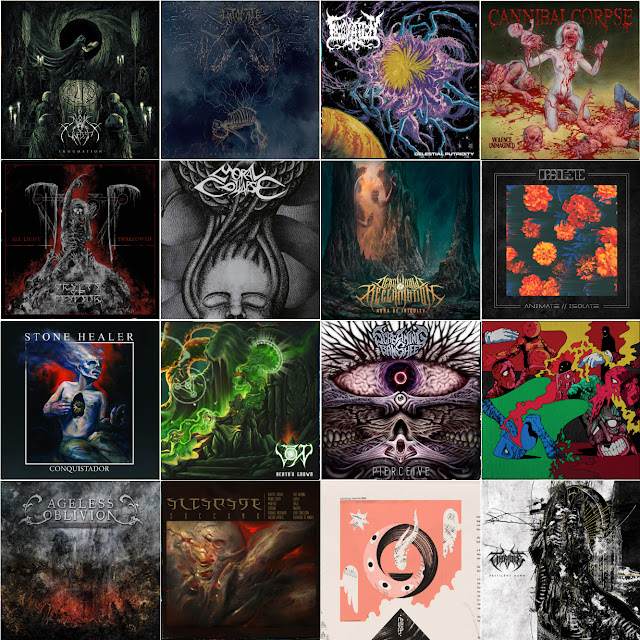 Its the end of the month, as usual I will share the albums that we think are quite attention-grabbing, okay without further ado, this is our list of the best albums of this month, worth checking out.
Unflesh - Inhumation
A technical death metal album that is highly competent, proggy, melodic, blackened, and diverse. The music is really good, and everything is well written, making it a solid, and enjoyable listen. Lots of beautiful tones, mind-blowing guitar solos, and sweet musical structures. A grandiose album, it's really cup of my tea.
Intonate - Severed Within
It's dissonant, it's techy, it's proggy! A grandiose album from Quebec quartet that deliver quality death metal, their music is more aggressive, soft yet intricated, calm yet devastating, and torture the mind uncompromisingly. Well, I never got bored when listening this album repeatedly.
Inoculation - Celestial Putridity
Damn, this album really rip my mind. A sci-fi technical death metal with unique old school sound. Full of fast, complex, and crushing riffs. The alien caveman is return to spread the terror!
Cannibal Corpse - Violence Unimagined
A cutting-edge death metal album played with unbelievable passion and fidelity, making another perfect addition to what is undeniably a master of the genre. The entry of Erik Rutan as the second guitarist made this album fresher and made a difference from the previous album. Pure evil riffs, devastating solos, ferocious vocal, and blast beat assault that hit your head. An impressive album.
Crypts Of Despair - All Light Swallowed
They have returned making progress on all sides of the music. The music is fierce, full of unnatural and dissonant sounds, punctuated by a frightening and terrifying atmosphere. It embodies the perfect combination of face-melting aggression and a heart-fluttering atmosphere, with the song structure remaining unpredictable. An album you will keep visiting again just because it has so much to offer in such a refreshing way.
Moral Collapse - Moral Collapse
This project completely kill my mind, stiffened my body and then raped my ears with riffly executed chaotic riffs. Without pause they tortured every corner mercilessly. Really a killer album!
Dead World Reclamation - Aura of Iniquity
It's fantastic album, full of technical, melodic, orchestral style of death metal with a hint of deathcore here and there with sharp riffs and mind-blowing guitar solos. This album is a follow-up to their previous album that shows what the band can fully convey in their sound and formula. But with this album, their music is tighter, stronger, fiercer.
Obsolete - Animate//Isolate
Oh man, it's a cruel debut album, a technical death metal music with wild riffs, aggressive and insane musical structure that inspired by old school action and strong thrash influences here and there. Althought they are new group but have got me with their best musicality craftmanship. Really killer album!
Stone Healer - Conquistador
Trully original and unique album, present a nice fusion of black metal, dissonant death metal and grunge music into one cohesive ensemble with many progressive metal and atmospheric elements. The soul-driven guitar playing paved the way for creating a deadly melody assault, accompanied by pathetic vocal scream, and focused drumming. An invigorating and great conceptual album.
Voyd - Death's Crown
It's a stunning progressive death metal album, the production are great and the songwriting is killer. A lot of catchy and exciting riffs, tight structure, amazing vocals, and mesmerizing guitar solos. Not dissapoint after long awaiting this album released, it's fantastic work.
Screaming Banshee - Pierceive
This album was composed with exciting and atractive death metal riffs, tons of grooves and melodies as well as sharp technical sections, amazing bass playing, thunderous drumming, and solid vocals showing the band's skilled craftmanship.
Atvm - Famine, Putrid and Fucking Endless
Weird and unique progressive death metal yet exciting stuffs, Really good job of incorporating technical, psychedelic, thrash, and blackened element without getting weighed down. A fantastic production that makes all the elements melt into one complete whole, needs more attention for this gem.
Ageless Oblivion - Suspended Between Earth And Sky
It's an awesome mix of technical and tight riffs, angular rhythms, proggy structures, and weirdly compelling hooks with great vocal, sick drumming, and stunning productions. Really nice album.
Altarage - Succumb
It's a music that is not easily digested by the casual listeners, the music is dark, noisy, and frantic with chaotic guitar riffs, torture blasting drumming, and sick vocals. Really oppressive and crushing album.
Victory Over The Sun - Nowherer
It's a sweet microtonal avant-garde black/death metal with some sludge and progressive influences, with brilliant songwriting and great productions. Their music filled with chaos, beauty, elegance, and awkardness. Worth to checking out
Throne - Pestilent Dawn
It's a bludgeoning Death/Black album, strike from beginning to end with agressive song structure, killer riffs, angry vocals, and intense blast beats. Promising materials!
Let'd see what will happen next month, see you ya!