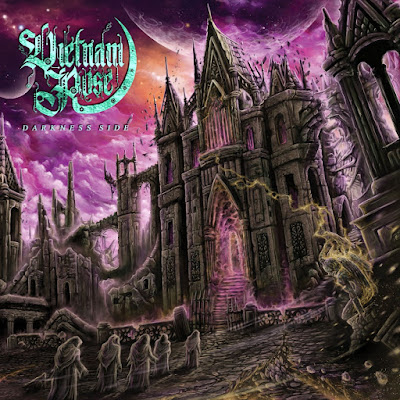 I have to admit that in the last few decades, in Indonesia there are so many brutal death metal music scattered everywhere, almost every corner of the country has good talents from this genre. But this time I don't want to discuss at length about the development of the music, this time I came to introduce a new band based in Bekasi, Indonesia. They are here to offer something fresh and different that is already there and accustomed to in their scene. Well, let me introduce them, Vietnam Rose, a new band that plays melodic death metal music with an epic and modern twist. On April 29th, 2021, they will launch their debut album is called "Darkness Side" which will be released by Eastbreath Records.

This album is composed of a succulent melodic musical structure, fast and technical riffs, charming solos, some beautiful synths, nice groove, energetic vocal and executed with epic finishes and unpredictable plot. Their music is great influenced by band like The Black Dahlia Murder, Alterbeast, Arsis, and Inferi.

Darkness Side "is a representation of what they looking from their surrounding environment, where many situations are not in accordance with the existing norms. So much resentment, anger, ambition, and dissatisfaction that they pour into the flow of lyrics on this debut album. Of course this is the result of their hard struggle in composing their music that has been composed in the last few years as a sign and their greetings to the world, so let's welcome their album with enthusiasm and joy. What an enchanting album.