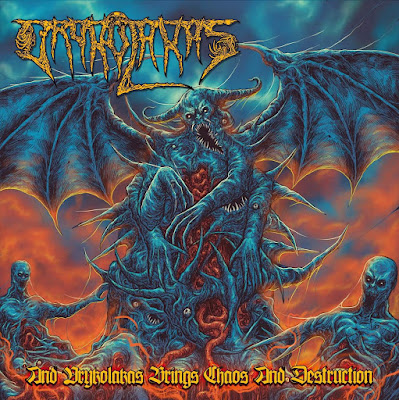 Vrykolakas is an old school death metal band that pays a lot of homage to the classic death metal era. This can definitely be told from listening to their music that influenced by Morbid Angel and Deicide. They are a veteran band from Singapore founded on 1991, who are still productive in making music, and on July 1st, 2021 they will release their new album is called "And Vrykolakas Brings Chaos And Destruction" via Dark Blasphemies Records, Vidar Records, and Sadist Records.

This album contains 8 songs that are full of amazing guitar playing, aggressive and crunchy riffs, fast tempos, stunning guitar solos, and gruesome vocals. I recommend you who like death metal with high intensity and a charming guitar playing to check it out. A lot of thought and hard work was put into this project and the performances of all that it contained should be respected and praised, as I think this album has a pretty good production and great song writing, deserves more attention.