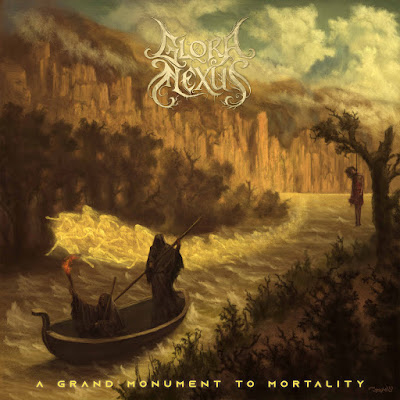 Indonesia is one of the countries that produces extraordinary Black Metal talents that are starting to be widely known by the world, for example bands such as Vallendusk, Pure Wrath, Choria, Dusk In Silence and now another new one man project called Glora Nexus has emerged. This project was formed by Svarte in Jakarta, Indonesia in 2019 and has released singles titled "Spiritual Havoc" and "Stimulus Codex" in the same year. And this June they released their debut EP entitled "A Grand Monumental To Mortality" through Bhumiduka Production (Malaysia).

This EP contains 5 songs with lyrics themed Nihilism and Death. Musically this project offers black metal music with beautiful and invigorating melodies, dark riffs, mind-blowing solos, fierce vocals, and great production. In this EP, Svarte also presents some incredible musicians such as Ragnar Sverrisson (Helfro), Lexy Alexander (Blodwen), Nuril Anwar (Devoured), and Teguh Permana (Tarawangsawelas) which adds to the extraordinary nature of this EP. This is one of the most astonishing, lovely and sweet black metal music I've ever heard, love it so much.