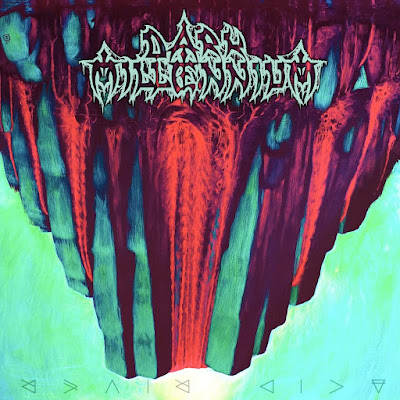 Yes, we have a new album of Dark Millennium is called "Acid River" that released by Massacre Records in January 7th, 2022. Yeah, it's the third album of them after reforming in 2016, but well, if we count from the beginning of their career in 1991, this is their fifth album. But here I will review a little from this album rather than the story of their journey.
Okay let's start it, a fun intro that is met with shrill vocals and terrifying howls opens this album, with the track The Verger, drums are roaring like the sound of waves hitting the rocks accompanying each side of this song, in the middle of the song they give an interlude with an atmosphere that is enough to make goosebumps. In the second song Godforgotten, again they insert a fun intro and it sounded more quirky, but when entering the song the atmosphere turned eerie, the sound of guitar roars pierced and sliced ​​every side of my hearing. The changing tempo makes the structure of this song is unpredictable. Then, moving on to the next track Threshold which is the lead single on this album, being the kind of multi-faceted monster you'd soon expect from this band, the thought that they were complacent was quickly dispelled. The scary treats they present again through the tracks Lunacy, Essence, Vessel, and Death Comes In Waves which closed the album with a tranquil intro, then transitioned to heady music with accompaniment by solid vocal, thunderous drums, and guitar playing that rich of varied riffs.
Acid River seems to invite us to reminisce with their old fun album, progressive death metal blends with very immersive doom metal wrapped in an atmosphere that fits perfectly with their classic release. The tempos changes of this album make their song structure is hard to predict it, the songwriting is creative as usual, and the productions pretty wonderful, yeah I think this is their best album since they reformed.