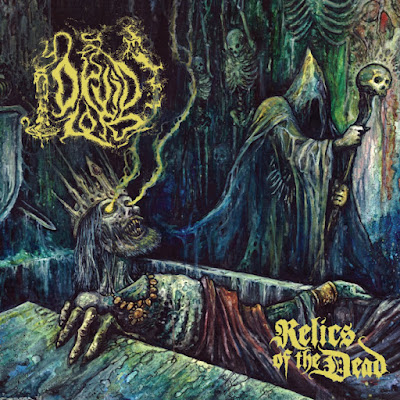 Druid Lord is a death/doom metal band that formed at Orlando, Florida in 2010 and have released two full length album before, this year they are return with their third album entitled "Relic of the Dead" that released by Hells Headbangers Records on January 21st, 2022.

The tittle track Relic of the Dead opening this album with sinister atmospheres that flows ferociously with a dirty and murky guitar riffs, then crawling and piercing with a haunting melodies, the drums groovy slowly torturing, and the eerie vocals come to give more harrowing sensation in this song. Thirteen Days of Death starts off slowly with eerie vocals and then slides off with a somber riff and transitioned to hypnotizing melodic solos, muddy doom passages, and the explode of drumming at a wild pace. The next track Mangled As The Hideous Feed present a nasty and filthy riff that decorated by a terrifying guitar solo with a dark and horror auras, and then the band take a breather with the bleak guitar acoustic interlude of Nightside Conjuring, then they offer us the next track Immolated Into Ashes which begins at a super slow tempos before a hypnotic guitar solo drags us into the faster and more brutal parts of the song. Fetid Tombs slowly tortures us with its rotten aroma that pours into slow and heavy guitar riffs accompanied by scary vocals that lead us to the next track Monarch Macabre, that opened with a melancholic and dramatic intros and welcoming by the vocals that full of anger and pain, then executed with jaw-dropping melodic guitar solos, heavy bass lines, and killing drumming. This album closed with Ethereal Decay, a dark outro that plunges us into an atmosphere of restlessness and emptiness with the uncomfortable feeling that created by this album.

For me Relic of the Dead is a wonderful death/doom metal album that features dark and ghastly riffs, haunting guitar solos, horror atmospheres, terrifying vocals, and clobbering drums. The production is pretty damn good, with a sinister tempo as if this music is slowly tormenting us until we fall into a pit of anxiety and emptiness that created by this album. It's really solid album that penetrare the minds and souls, highly recommended.