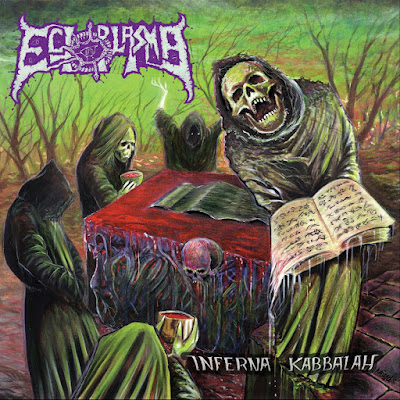 Ectoplasma is a band that formed in 2012 at Nikaia, Greece, musically the band played old-school death metal which heavily influenced by bands such as Asphyx, Autopsy, Death, Demigod, etc, throughout the career, they have had three full length albums. In this years to celeberate their tenth years on music metal, they release the fourth album is called "Inferna Kabbalah" via Memento Mori and Rotted Life Records on January 24th, 2022.

This album begins with the track God Is Dead, Satan Lives (Rosemary's Baby), a terrible track, with catchy and heavy ​riffs, the drums are very energetic, the bass are powerful, and the putrid vocals strengthened this whole song, then Appaling Abomination, a track that stomps, throbs and vibrates with eerie energy, the speed increases as the guitars create scary harmonies with unmerciful drumming delivering a heavy punches and then blasting them all in one go. The next track My Medieval Urges Materialized strikes with strong old school patterns with some death doom influences and a bit of a technical twist, exploding and melting into a terrifying force. Infestation Of Atrocious Hunger offers thick and heavy riffs, also some technical hints are tucked away here, the catchy tempo makes this song enjoy to dance, before being executed with a hypnotic and intoxicate lead. Next track, Inferna Kabbalah gives us a mystical and horror auras with dark and bleak tones but captivates the heart, changing tempo forces us to only be silenced and fascinated to enjoy the beautiful musical structure in this song. Gruesome Sacred Orgasm, opened by an excellent bass performance segment, this track comes with a slightly slower tempo, fun riffs, energetic vocals, and powerful drums, then the Filth-Ridden Flesh exploded with scary riffs and occasionally a few catchy technical touches appeared in this song, a pretty rotten song. The album closes with the track Desecration of the Christian Existence with an energetic and aggressive tone that will make you nod while accompanying all this sacrilege carnival.

Inferna Kabbalah delivering an eccentric, energetic, and aggressive death metal show with nasty, putrid, haunting, and weighty guitar riffs, excellent bass, powerful drums, and monstrous vocals. The band combines catchy and beautiful harmonic elements with a strong base, with some modern touches integrated into their old school death metal style. The songwriting is pretty pure and the productions is outstanding. A solid and smoldering death metal album that you must check out.