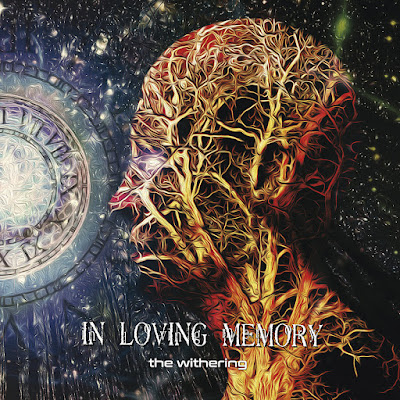 In Loving Memory is a melodic death/doom metal band that formed in 2005 at Bilbao, Spain. The band has been asleep for a long time, almost eight years after the last EP Redemption was released in 2014, finally this year they are back with their third album titled The Withering, which was released by Funere on January 14th, 2022.

Musically, in The Withering the band make several changes in terms of songwriting, they explored their music in a more progressive direction, with an extraordinary melodic touch to become the perfect decoration of the doom music they offered so far. The instrumental playing in this album is really enchanting, a series of sweet, epic, and tasty notes are woven with a soundscape that is majestic, luxurious, and grand become an outstanding performances here. With a series of songs that range from seven to eight minutes in length, this album really hits the doom chord with a very strong progressive touch. After tasting a few songs to get the feel for it, I listened to this album from the start and I was really carried away and wrapped in the feel of this album. All songs on this album are written in a melancholic doom metal atmosphere with a strong death metal intensity as the base, starting on Stellar Runaway and ending on Martyrdom of Light, this album provides us a beautiful and fun journey that we can certainly remember for a long time.

The Withering is an album that immediately touches the heart of every death doom metal lover, and gives a sense of satisfaction when listening to it. The beautiful, soft, and epic tunes are wrapped in a melancholic and sometimes sad nuances with a luxurious and majestic soundscape, a progressive and strong melodic touch makes their music in this album feel more weighty than their previous releases. Well, after eight years of slumber, they are return and presented a great masterpiece this year, an album that should not be skipped.