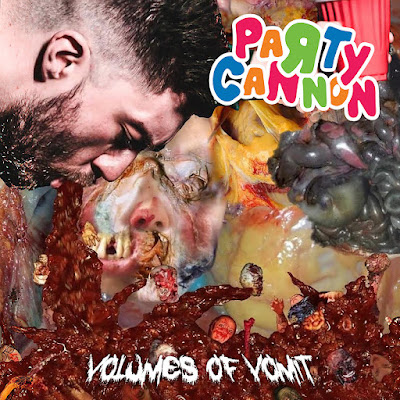 Sometimes listening to the goofy side of metal is really fuckin fun, as always present by Scottish slam brutality units, Party Cannon. Yeah, after long awaited by slam worshipper, finally this slam legends return to declares their silliness and madness through a new album is called "Volumes of Vomit" that released on January 14th, 2022 via Gore House Productions.

Okay, the slam party on this album opens with the track Tactical Chunder, with very heavy and chunky riffs, offering an old School mix that accentuates the bass and blast beats, we are also surprised by the terrible vocal transitions from guttural growls and pig squeal to higher pitch of screams, oh shit, it's something crazy. The next track Grass Obliteration (Blazed and Confused), on this track they not only bring massive chaos, but I think they also offer a modern and technical touch, strengthened by vocals from Don Campan (Waking The Cadaver), adding weighty in this the song be more scary. The madness continues on the third track Nauseating and Unpalatable, where guest vocals from Ross Sewage (Exhumed) bring a deeper sense of old scholl, with chaotic riffs, heavy bass, and ever-pounding drums. Track Naked Beach Frenzy, a short composition that presents a more complex, fast and groovy guitar riff that is fun for us to bang our heads. 60 Stone Threesome, where in this song they don't reduce the intensity of their madness, featuring filthy vocals, fierce slam riffs are getting more and more torturous here. The next song is 1000%, again they providing a fast and devastating riff, yes it's a short composition but loading pure violence with a bit of chaotic leads. Again on this album they feature guest vocals, Andrew LoMastro (Cerebral Incubation) filling his turn on the track Electric Soldier Porygon, which adds to their anger on this song. The last two tracks, I Believe In Dani Filth and The Dirty Bubble, they still bring a chaos and catch our attentions with a series of heavy, dirty, and weighty riffs and disgusting vocals.

Overall, Volumes of Vomit invites us to enjoy slam party together with accompaniment of heavy, chunky, and weighty guitar riffs, disgusting and filthy vocals, scary pig squeal, devastating drums, and crazy bass playing. This is the album that slam devotees have been waiting for, and it certainly brings its own happiness through the madness, chaos, and silliness that loaded in this album.