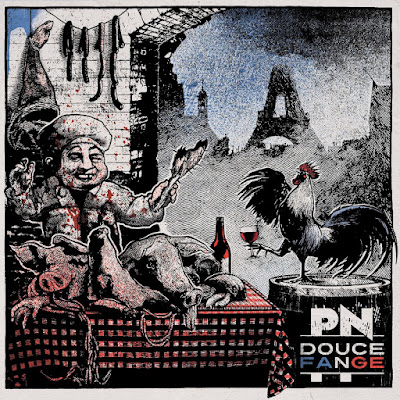 Watching a circus show is indeed very fun, it can be enjoyed by all ages, both children and adults, but what happens if the circus music is fused with the horros of back metal? You will get that moment on the new album from the French project Pensées Nocturnes entitled Douce Fange which was released on January 21st, 2022 via Les Acteurs de l'Ombre Productions.
Pensées Nocturnes have been struggling in experimental music with seven albums that was released during their career since 2008. Douce Fange is the seventh album that has further cemented their strength in the experimental music scene, through this album you will be invited to fantasize about engaging circus music wrapped in elements of black metal, avant-garde, neo classical, baroque, jazz, and experimental music. The show is truly marvellous, featuring varied compositions with intense drums, pummeling bass, and well-crafted guitar work, a solid vocal structure, and some instrumental extras such as saxophone, musette, accordion, etc. The madness of this album opens with the track Viens Tâter D'mon Carrousel and closed with the track Gnole, Torgnoles Et Roubignoles, in about 50 minutes you will be brought into a very creative and extraordinary musical performance.

Douce Fange is an album with brilliant and genius songwriting, they mix the excitement of carnaval, orchestral, opera, and circus music with driving elements, such as black metal, avant-garde, progressive, jazz, neo classical, and baroque that experimentally executed into insane compositions with so catchy instrumental playing and soundscape that are theatrical, glorious, cinematic, and bombastic. This is an album that is capable to break through the top tier of experimental and avant garde music, which has a taste that will surely memorable in the hearts of listeners for a long time.