Review: VoidCeremony - At the Periphery of Human Realms (2022) 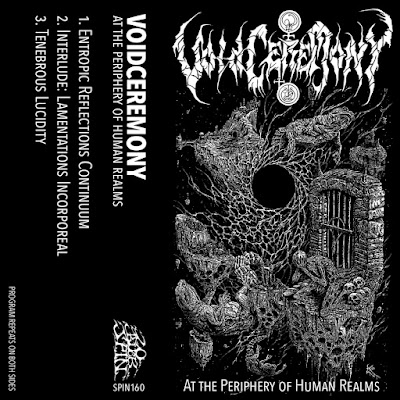 VoidCeremony is a progressive/technical death metal band that formed on 2013 at California. Their debut album "Entropic Reflections Continuum: Dimensional Unravel" is so amazing and one of my favorite 2020's album. This year they are return with new promo is called "At the Periphery of Human Realms" contains 3 songs, that released on January 6th, 2022 by 20 Buck Spin.
This demo is an intermession of sorts between their debut album and the second album they are currently working on, 'At the Periphery of Human Realms' is a brief sketch and overview of the music they will offer on their next album, where the band's creative minds continue to wander to create quality music.
This promo opens with Entropic Reflections Continuum, a great song that composed with a series of catchy, energetic, and intricate guitar riffs, amplified by monstrous hoarse vocals, amazing guitar solos, to extraordinary bass and drum playing. Then, Lamentations Incoporeal, a serene interlude serves as a bridge between the first and third tracks. This promo closed with Tenebrous Lucidity, still relying on the incredible guitar playing with inebriating riffs and solos, like a special shows of them. The song also features wonderful bass playing with outstanding tone lines.
Overall, the material they offers in this promo depicts a bit of a difference in terms of songwriting, more solos that are astonishing and more challenging, also that the song structure is always unpredictable and superbly written.