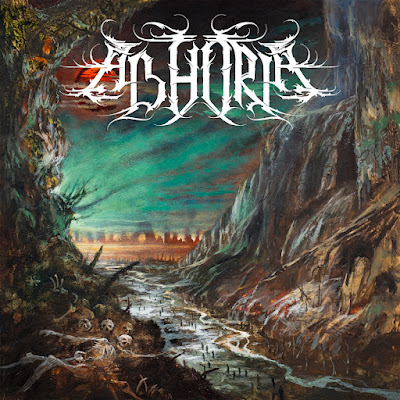 Abhoria is Californian blackened death metal band that formed in 2017, this project featuring member of Ashen Horde, Catheter, and Vimana. They was released self-titled debut album on February 4th, 2022 via Prosthetic Records.

The album opens with False Idols, a tight track with dark melodies, piercing vocals, and dense drums blending together to create a dark sonority, then Mountebank comes with a high level of aggressiveness, wrapped in a series of fast guitar riffs, strong vocals, and heavy bass and drum lines. They strike with an intense unmercifully that allows the band to create massive torture, while the immersive guitar solos kick us into the darkness abyss. The Thorn is a track that have a chaotic mix of tremolos, solid drums, ruthless vocals, and complete with beautiful guitar solos that set off destruction, then Byzantine Promises comes with a heavy construction, with a solid vocal foundation and crushing drums, while the sharp guitar riffs are endlessly slashing us with its dark melodies. Grave Expectations hypnotizes us with its bleak melodies, some murky guitar riffs, some dark tremolos and moody vocals that leading us into a room full of anxiety and fear that gives a cruel inner torture. The next track is Unevangelized, bursting a breath of dark dissonance with the right dose of technicality and some dark tremolos, while its horrifying vocals come like casting a spell that will bewitch us with a vicious curse, then Hollow stomping with angry vocals, laced with fast and dark guitar riffs, while its dense drumming hits us with a heavy and deadly punches. The album closed with Sunless, an epic 7-minute track that includes more melody, some great technical touches, and vocal diversity, even going so far as to include some clean singing. It's a great track with amazing guitar solo that touches the core of our hearts, before drowning and leaving us into the void.

Abhoria is an outstanding blackened death metal album with a lot of melodic diversity, dark tremolos, and great technical touches. Pretty engaging in my opinion in the terms of songwriting and productions, the music is really punishing and torturous. The guitar riffs are murky, catchy, sharp, and epic, the vocals are solid, and the drum works is simply awesome. This is a self-titled debut album of them that definetely deserve more appreciations, because this is fuckin amazing releases. Highly recomended to check this one.