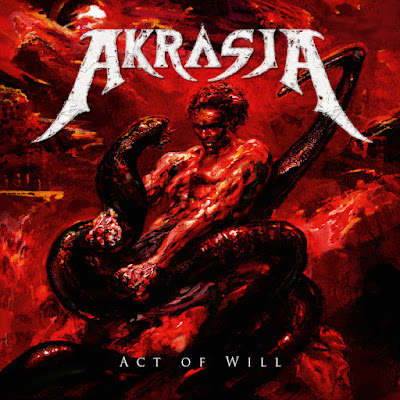 Akrasia is death metal group that formed in 2017 at Budapest, Hungary. The band started their career by releasing a demo in 2018, and along with time they finally managed to release their debut album entitled Act Of Will on January 29th, 2022.
The album begins with Restless, an energetic track that offering a solidity of death metal with a beautiful melodies, tasty groovy and thrash elements here and there, along with a tight riffs, powerful vocals, and dense drums, then Inside stomps with its thunderous rhythm, attacking with a series of catchy riffs and swaying melodic accompaniments, and clean vocals that seem to provide a dynamic between the onslaught of this music's anger with its very dense structure. Lost Under The Pressure, a track that offers a djent rhythm with a solid modern prog riff, and the placement of the right vocal combination gives this song its own flavor, and the captivating solo brings the equanimity that gives heart's victory in the end. The next track Sterile Gods seduces with its charming melodies then transitions into explosive rage with heavy guitar riffs and powerful vocals, solid drums again giving way to develop an increasingly fun groove with indulgent guitar solos performances that lead us to Becoming The Mountain, that opens with rhythmic drumming and is greeted with tight guitar riffs and a huge groovy, then neck-breaking breakdowns and shrill guitar solos pave the way for the next track, Aftermath, the longest composition on this album that allows the band to explore their skills more broadly in concocting all the right elements in this album, you will be spoiled with a ton of hypnotic and intoxicating melodies in this song that gives a climax to the end. The Cosmonaut, a melancholy interlude that gives us a moment of serenity before We Built The Sky comes to capture and immerse us with its beautiful melodic power accompanied by solid vocals reinforced by catchy and crunchy guitar riffs that reverberate until the end. The album closed with The Last Serenade, a powerful and epic instrumental song that indulges us with a series of mesmerizing, hypnotizing and captivating melodies that deliver a memorable farewell with climax satisfaction and serenity for the listener.

Act Of Will is an outstanding debut album from the band that provides a great mix of death metal with various elements such as thrash metal, melodic death metal, and progressive metal which are blended into a solid forces with a series of crunchy, heavy, and tasty guitar riffs. The vocal combination is amazing between clean vocals, screams, and growls, the drums are dense and energetic, the bass performances are excellent, and a series of riveting, captivating, and hypnotic guitar solos spoil us here. The songwriting is tight with incredible production. A stunning album that should get recognizable and deserve more attentions.