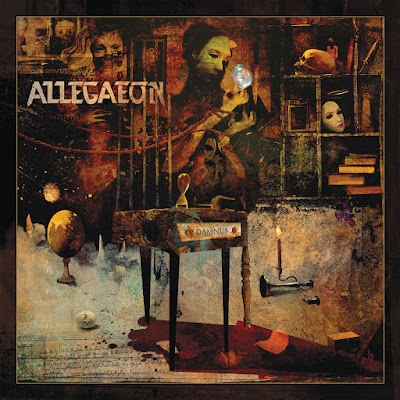 It's felt never enough, bored, and tired to love Allegaeon, because in every album they are always amazing. This year they are return with another great album, this is their sixth album is called Damnum that was released by Metal Blade Records on February 25th, 2022.
This album opens with Bastards Of The Earth which begins with an epic and melancholic intro, then quickly glorious melodies arrive to throw us into an explosive rhythm. Catchy riffs mingle with crushing vocals, while captivating guitar solos sneaking between the rags of the chaos, then Of Beasts And Worms indulges us with serene and beautiful melodic parts, it doesn't take long the music to explode with heavy vocal attacks and a menacing structure, then above the ever-increasing devastation, a series of clean vocals appear to temper a bit of its aggressiveness, and the ruthless guitar solos torment us with sharp melodies til the end. Into Embers, which is the main single on this album comes with its intoxicating melody, then gives us a composition with a very solid structure. The clean vocals add a touch of serenity with a truly hypnotic guitar performance before they explode again on the track To Carry My Grief Through Torpor And Silence with a heavy tone and fast rhythm, this song also reveals their dark side which is present through a vicious guitar riffs, evil vocals, and devastating drums, while the invigorating guitar solo comes along with a melancholy nylon guitars session and excellent bass performance that caresses us until we lose consciousness, while Vermin has a heavy but very interesting composition. The technical parts flow in a thunderous groove and also seem to relentlessly hit us ruthlessly, jaw-dropping guitar solos coming to slash us with piercing melodic attacks, then Called Home reveals a moment of calm with clean vocals and a beautiful acoustic guitar before moving us forward to a more ferocious rhythm. The strong progressive influence reveals varied and unpredictable vocal parts in this song, but its instrumental complexity never hesitates to delivers a sense of violence.
Blight, a track that seems to revert to a more aggressive and dissonant sound. Its toughness and power fuse with the series of complex, sharp, dense, and tight guitar riffs, which will keep its melodic influence burning and blazing, then the astonishing guitar solos come with its mighty power that accompanied by quirky and vintage keyboard playing, before a terrifying howl of vocals executes us with its hypnotic sorcery, before the band presented The Dopamine Void, Pt. I , a short composition that builds on a beautiful and serene sound with its melancholic melody and soothing clean vocals, then connects to The Dopamine Void, Pt. II which shows a more aggressive side. This song allows the band to showcase the incredible skills of each member, from fast vocals, catchy riffs, thick bass, to excellent drums, while its amazing guitar solos come to hypnotic us with heady melodies until we sink into the cradle that they make. Saturnine, a dark and heartbreaking composition that constructed from a series of dark guitar riffs, terrifying vocals, and incredibly solid drums. The groovy rhythms take over our focus before they let the incredible main piece overwhelm the song with astounding melodies, then In Mourning arrives to give us a chance to breathe and reflect for a moment with the accompaniment of an epic and tranquil acoustic guitars before Only Loss took its place to close this album in grandeur. This song becomes their final assault with an incredible performance of a bunch of heavy and dense guitar riffs, aggressive vocals, and torturous drumming. They also insert a lovely clean vocals in the composition that lead us to the end of this amazing journey with a true victory.
Damnum is an incredible album, they keep on spoiling us with a bunch of melodic guitar solos that are astonishing, heart-touching, hypnotizing and even intoxicating. Everything built on a varied structure along with complex, catchy, and epic guitar riffs, evocative acoustic parts, varied and well-combined vocals, excellent bass performances, and torturous drumming. The songwriting is brilliant with top-notch production. This is an extraordinary masterpiece from them who are able to reach the highest level of technical and melodic death metal music. It becomes something unique and invigorating that they offer and serve in this album. Really outstanding album.