Review: Craniotomy - Ripped Out By Violence (2022) 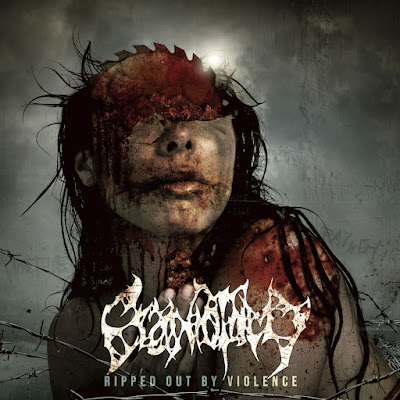 After a long slumber, Slovakian Brutal death metal troops Craniotomy returns with their new album is called Ripped Out By Violence which was released by Amputated Vein Records on February 4th, 2022.

The album begins with Sample Of Immoral Anatomy, a brutal track with heavy slam grooves and a strong technical touch, then its dense guitar riffs dance along with heavy bass and dense drums, while his disgusting vocals adorn every hum of this song, then Collector Of Inert Bodies, comes with its ruthless power that led by very dirty vocals, then strikes with a series of raw technical riffs, excellent bass performance, and intense blast beats, while the heavy groovy parts end this track in ruin. Another cruel track is Sadist's Gallery Of Skin Pictures, stabing with its aggressive side, here I catch a touch of very savage goregrind wrapped in a barbaric slam rhythm and lush technical structure, creating a hard brutality that leads us to the next track Drowned In Alimentary Canal, moves with effectiveness that created by a barrage of ripping and tearing guitar riffs, its solid vocals play a major role in creating massive chaos, while his drums grind with powerful thumps into the next attack in this track. The flow of the music is so crazy that allow us to dance together in destruction. The dramatic intro opens Resonances Of The Cut and Chopped Heads, then smacks of chaotic drums to the accompaniment of intricate and dirty guitar riffs explodes like a devastating bombs, distortion by distortion crashing like a barrage of bullets that could pierce through every part, then its nasty vocals comes to keep the brutality and madness echoing through to the end. The terror continues when enters the next track Killed, Necropsied And Boiled, where rapidity and aggressiveness combine to create intense frenzy, then Innocet Sustenance rips us with a very dense, heavy, and fast guitar riffs, while the vocals continue to bark with intense madness to spread a fear. Without Symptoms Of Life blasts off at an incredibly aggressive pace, allowing the band to unleash their full energy on destroying us completely, before the sinister Outro closed the album with dark and cinematic soundscape that ends this torture and leaves us with the perpetual pain.

Ripped Out By Violence is a crazy album that spreads the terror of wild and merciless brutality, where this album offers an aggressive mix of brutal death metal, slam, goregrind, and technical, that full of heavy, complex, tight, and chuggy guitar riffs. The vocals are nasty and disgusting, and the drums are absolutely crushing. The productions is really tight with barbaric songwriting. It's an album that will torture and destroy you in same time.