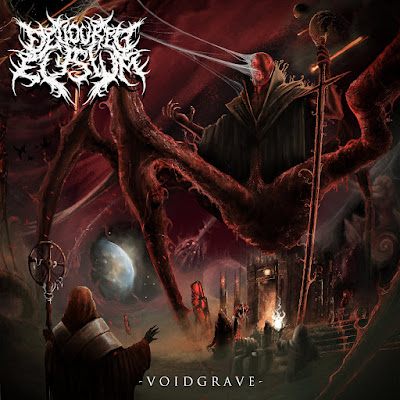 Turkish death metallers Devoured Elysium are return to make a new bludgeoning through the sophomore album is called Void Grave that follow up their debut album Extermination Policies (2020), this new album was released by Gore House Productions on February 18th, 2022.
The album begins with Setup, a dark intro that reveals the monstrous side of band through a dramatic soundscape before they are stomping in Void Grave, a very heavy track featuring dense and complex guitar riffs, as well as devastating drums. While his ruthless vocals continue to grumble between the attacks of brutality and technicality that continue to surge and hit us mercilessly, then Mastermind comes to show off their technicality to a more lethal level that melted with brutality, where the heavy slam beats continue to destroy us with a neck-breaking breakdowns, seem they don't feel tired of punishing us with a very hard musical structure and complete with its terrible vocals. Green Screen Failure, a track that hypnotizes us with a modern intro with a space atmospheres, before exploding into a heavier and darker music, with their intricate and heavy guitar riffs constantly bombarding us with incredibly complex technical notes, then Deus Ex Mechina valiantly arrive with an incredibly heavy and chaotic structure, delivers a massive madness centered on its ruthless vocals, fast guitar riffs, and devastating drums. The lunacy continues on the Slam Panzer which features a heavy and sturdy composition but does not losing the complexity that radiates from its intricate guitar riffs. On this track they feature a guest vocal Kirill Zarubin which amplifies this attack with his very savage vocals, then Spinerender follows it with very solid slam beats, it's a short composition but doesn't hesitate to slay us with its cruelty. Oracle comes to keep the cruelty and savagery continues to flare above the complexities of his ever-resonating voice, then its chaotic guitar solos strike us with devastating tunes, before Chrono-Shift concludes the album with blazing aggressiveness. Where complex, fast, and tight guitar riffs alternately tormenting us mercilessly and making us stagger towards the end of a very cruel journey.
Void Grave is a dangerous album featuring a ruthless blend of brutality, slam, and technicality with a huge groovy into a lethal weapon. A series of fast, complex, and thick guitar riffs alternately destroy our defenses along with disgusting vocals, heavy bass lines, and torturous drumming. This is a very massive form of punishment through the density of its structure with varying tempos. It's an uncompromize and unmerciful brutality, really recommended.