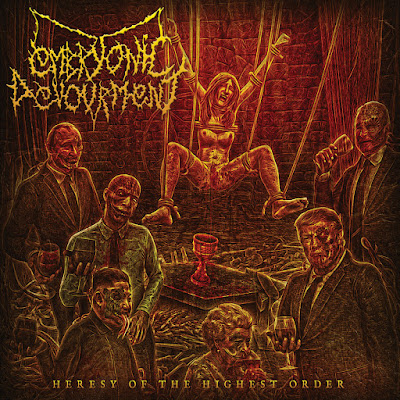 What amazing comeback from Californian technical brutal death metal group Embryonic Devourment, how not awesome because as we knew together, they'd been asleep too long, and I thought they'd end up just like that. Eight years is their hermitage to producing a new album, and February 25th, 2022 is the day that they choose to release their long anticipated fourth album is called Heresy Of The Highest Order via Unique Leader Records.
The album begins with the Cathy O'Brien Experience, a catchy track that opens with some quirky sounds and transitioning to dense and complex riffage, its drums strike at high speed that backed up by a savage vocals, then exploding together with devastating force before we find out the right footing to survive, moving on to the next track Heresy Of The Highest Order, a track that stings with high technicality on top of an ever-increasing brutality, its structure is very aggressive and complicated, while its chaotic guitar solos sneak between the density of the music that creating a chilling threat, then High Clearance Code Access comes with a massive brutality, we will feel it where the evil vocals continue to spread cruelty, then the guitar riffs delivers fast and chaotic notes that accompanied by aggressive drum attacks, while the sick guitar solos spout complexities with high technicality. It Began With Lizards, a track that has a very chaotic structure, it's hard to digest as its guitar work features intricate and messy riffs, along with gruesome vocals and torturous drumming, it's a track full of craziness on this album, then Manipulation Of The Senses opened with a strange conversation that evokes an eerie aura, before the complexity of the music explodes again with a series of fast and sharp guitar riffs, they seem reluctant to let down the aggressiveness that continues to torture us mercilessly, and the chaotic guitar solos arrives to engulf us with deadly tone. Murder Of The Ancients, a track that stomps with a very dense drum rhythm, where the diabolic guitar riffs mercilessly slash us with their messy structures, in this track they also interpolate a crazy dissonance that will increase a chaos that will continue to reverberate until the end, while Never Ending Human Misery opens with a menacing melody, before complexity takes its place again with its ever-increasing riffs's velocity, its solid vocals make for a superb show amidst the chaos that escalates with every second. The album closes with The Lucid Dreamer, I think it's the most accessible and digestible track on the album, they loosen up a bit of aggressiveness but not bereave a side of its complexity, and this is the final track on the album that allows the band to launch their ultimate attack with all the madness and cruelty that will lead and then leave us into the dimension of chaos.
With Heresy Of The Highest Order they return with a lethal attack after a long slumber, where this album features malignant technical brutal death metal music with intricate composition and musical structure that built from a series of fast, complex, chaotic, and messy guitar riffs. Its savage vocals continue to spread a frightness, and its dense drumming tortures and crushes us with a deadly blast beats. The songwriting is knotty yet highly addictive, and the production is simply amazing. This is a menacing album that will bring endless chaos and madness. Don't sleep on this stuff.