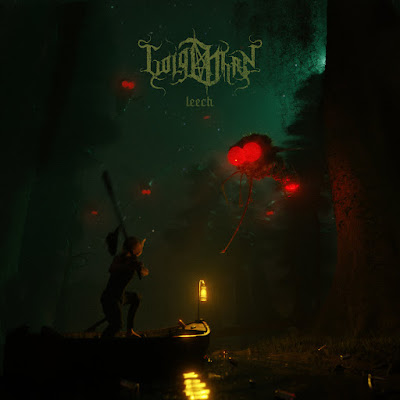 Golgothan is a death metal group that formed in 2014 and based at Lafayette, Louisiana. This band just release the debut album is called Leech on February 4th, 2022 via Lacerated Enemy Records.
Album begins with The Rack, a short introduction that delivers a horrific vocals with creepy nuances to start the cruelty on this album, which is immediately greeted with the next track Leech, that stomping with heavy and tight riffs, ruthless vocals that give the torture even more depth with its devastating drumming and some slashing solos. The nuances that are presented really represent a big cruelty that conveyed in 3 Teeth to Eat You, which offers high aggressiveness with a fast tempo the band attacks with a series of fast and sharp rifs that will immediately devour you with a very crazy musical structure. Parent Organism comes with a heavier musical structure and offers high velocity to execute us quickly through a parade of punchy and chaotic guitar riffs, terrible vocals, and crushing drums. The guitar solo takes on its role to finish us with cruel melodic incisions til the end, then Gravy Train hits us with its fast and aggressive beats centered in a tight and dense guitar riffs, sharp vocals like a knife ready to tear us apart, and heavy drums like a big hammer ready to pound us to shreds. Bottomless Pit, a track with an old-school feel combined with a modern sound that forms a strong unity that doesn't take away the brutality and aggressiveness of this track, a stunning guitar solos adorn this track which adds to the madness with its monstrous vocal accompaniment. The next track is Lard Is My Shepherd, it seems the band is always increasing their aggressiveness in each song, with varying tempos providing a cracks for them to torture us even more with a barrage of sharp riffs and vicious vocals, while bass and drums dance together with heavy and devastating lines that created a chaos. Without further ado they strike again with Winged Death, a track that is loaded with a velocity in the structure of the song, which features a crispy and crunchy guitar riff that wrapped with a heavy groovy and a dark feel, a great guitar solo comes at the end of the song to provide a bridge that connects it to the next track Christian Mingle Killer, a dynamic track that offers a sharp melodies that is poured into a catchy and tasty guitar riffs which gives own sensation in this track. The album closed with The Overlord, striking with savage and barbaric vocals, blasting and devastating drums, catchy and weighty guitar riffs, and complex guitar solos executing us with cruelty to the end, and this torture will continue to haunting and imprinting forever.

Leech is all about creating intense brutality unrelentlessly, blending a complexity, velocity, and aggressiveness of death metal with a feels of old school. The riffs sound catchy, chaotic, and occasionally melodies, the vocals are barbaric, and the drums pure blasting and devastating. The productions are pretty incredible, and the sound selections is crunchy and clear. Good? Yeah it's a good stuffs, so why not you enjoy this gems.