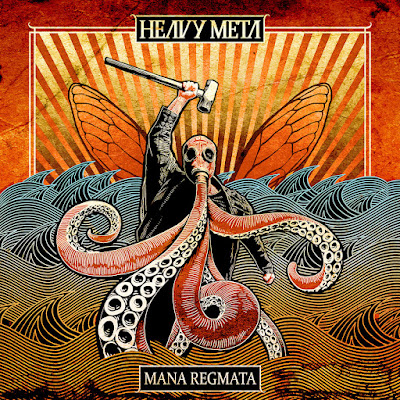 There is something interesting here, when a mixture of different genres is melted and wrapped into something very unique stuff, that's what group of Lowell, MA Heavy Meta did on their debut album is called Mana Regmata that was released on February 11th, 2022. If you don't know them, they area active since 2017 and have released self-titled EP on 2019. Well, now let's see together what they offer in their debut album.
The album was opened by Blastocyst, a track that features very heavy bass line, chaotic guitar riffs, and dense drums compositions, along with harsh vocals. Its melody is dissonant and odd, but the band shows a great musical flair, then move on to the second track Caffeine Casket that starting simply with lots of soft melodies and ambient movement in the background, before slowly creeping into some strong proggy parts and burst out along with catchy guitar riffs, eerie vocals, and intense drumming that wrapped with blackened edge. Worms, a track that starts off with a fun-filled groove but with a heavier structure, its catchy composition is built on a series of tight guitars, thick bass, and solid drums, while its eerie vocals come with great articulation, so that the energy conveyed is hit right at the intended target. Psalm VI, the longest track on the album with over eight minutes duration, that allowing the band to wreak havoc continuously with blazing guitar and bass attack. The tempo become slow in the mid-song which letting the melody enter to give a bit of different flavor, and then the chaos exploded again and continued to the end, while Delusions arrive with a heavy attack on its very complex guitar riffs that reveal the technical and progressive side of the band. This track is simply amazing with so much sonority they can squeeze into the composition. Its angry vocals unrelentlessly spreading hatred that continues to overflow until the end. Two Fly has a more accessible structure with a soft and captivating melody that give a little cracks for us to breathe, and takes us towards a more experimental music with some tranquil alt-rock parts, before the Boötes Void berserk with a bursts of savage dissonant that amplified by chaotic mathcore and a weighty metallic hardcore sections. Its sinister vocals are drowned in layers of disgusting synth and noise. The album closes with Vicious Wishes, a track that has a heavy and throbbing beat, and its discordant melody sparks the chaost that produced by wild avant-garde sections, then its jaw-dropping guitar solos come to guide us to the end of this journey that full of mystery and intricacy.
Mana Regmata is wild, chaotic, and complex album. They combine a range of elements, such as progressive metal, mathcore, technical, avant-garde, black metal, metallic hardcore, rock, etc. They mix all in one catchy composition and liberate himself from certain styles to create his own style. Yeah, this is indeed difficult to digest for casual listeners because it has an unpredictable structure, crazy instrument playing, but balanced with super interesting songwriting and amazing production, So I hope you guys can still enjoy this goddamn music. Recommended? Of course, it's a good stuffs, they took listener into different and enfaging journey throught this album.