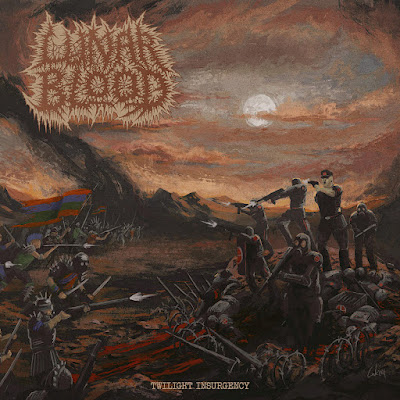 New Jersey Blackened death metal metal unit Lunar Blood was released their debut album is called Twilight Insurgency on February 18th, 2022 via Pulverised Records. This band formed in 2020 and have a demo previously that released on 2020.
Putrified Rot started their movement on this album, a track that launches a very dirty death metal attack, with a series of heavy guitar riffs and very disgusting vocals, while the drums are very intense giving deadly hits, then The Hammer came with a high level of aggressiveness that emanated from their fast and sharp guitar riffs, they gave off a fright auras that shrouded in eerie darkness. Its terrible vocal howl seems to give a cruelty that will continue to increase and flame until the end. Gastrointestinal Industrial Complex reveals the chaotic side of band, showcasing the madness that built up of intricate guitar riffs, heavy bass, and solid drums along with a nasty vocals. It's like a crazy mix of diabolical blackened death metal and grubby old school with a raw technical touches, as well as some wild dissonance, while Ululating In The Depths spreads more ghastliness that culminates in a lugubrious soundscape and some gruesome howls, before the Wrath March arrives to deliver a massive destruction through a chaotic and messy guitar riffs and crushing drums. The tones are heavily influenced by vile technicality that wrapped in a very smeary nuances and dark sonority. Parliament Of Trees has a heavy musical structure and a composition that very sticky with dirty and dingy guitar riffs, ferocious vocals and killer drums, then Gnawed comes with a slow tempo, this is probably the gloommiest track ever on this album, featuring elements of strong doom metal that accompanied by eerie howls and dragging guitar riffs, also chaotic guitar solos appearing on the background that providing a fear that continues haunting. God Of The Trainwreck reawakens the aggressiveness with some catchy technical parts that are poured into a collection of sharp and abusive guitar riffs that are ready to slash and tear us apart at any time with a grimmy melodies, before Pig Hunter closes the album with an explosion of heavy and dense musical structure, that centered on its killer guitar riffs, savage vocals, and ruthless drumming. This is the end of a dreary journey with all the torture that will continue to accompany it until the end.
Twilight Insurgency is a ruthless album, featuring an insane mix of diabolical blackened death metal with a vile technical touch and a grubby old school feels, along with a series of murky, dirty, grimmy, and savage guitar riffs, nasty and disgusting vocals, heavy bass lines, as well as a very crushing drum. The songwriting is very unique with a pretty good production. This album will give you a different experience and sensation when you listen to blackened death metal music in general. An album that is worth to checking out, and I think deserves more attentions.