Review: Near Death Condition - Ascent From The Mundane (2022) 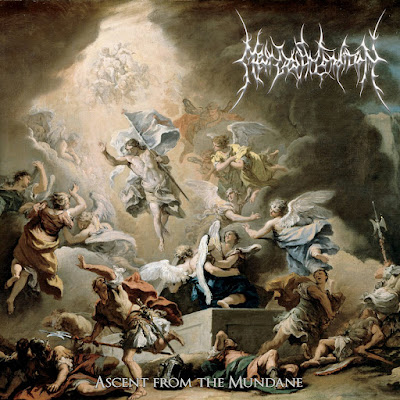 Near Death Condition has been slept for a very long time after last releasing the album Evolving Towards Extinction on 2014, finally this year they decided to rise and return from their slomber by releasing a new album is called Ascent From The Mundane which was released by Unique Leader Records on February 11th, 2022. This is the fourth studio album from this Switzerland band which proves that they are still malignant as usual.
Witness Of The Martyr begins the threat on this album with its high aggressiveness that offers a chaotic and complex guitar riffs, dense drums, and terrifying vocals. The structure is very tight with unpredictable tempos that add the lunatic of this song, then Nothing From Naught stomping with wild bursts of dissonance, the guitar riffs still have the same structure as in the previous song but with a higher level of goosembumps, while the vocals continue to with all their fury and the chaotic guitar solos rip us apart mercilessly and lead us into in the crazier torture of Wisdom Of Meaninglessness which features a dense drumming and barbaric vocals, giving the band a chance to launch a lethal assault with a string of intensely tight riffs before Enlightenment immerses us in a dark and dramatic soundscape, it's a resounding respite that give us a chance to breathe, before The Bridal Chamber comes with its dark bursts of dissonance, chaotic and complex technical riffs that alternately hypnotize us with its powerful energy, while Astral Journey comes with its dark and chaotic melodies, also high-level technicality combined with disgusting vocals and devastating drums, allowing the band to continue to torment us with its aggressiveness. Ascent From The Mundane explode with a burst of dark dissonance, then wrapped with chaotic melodies, also technical elements here and there and supported with long duration allowed the band to freely launch endless tortures above the darkness they created, before the two outro tracks close the album, And Then We Have Shined Above All accompanies us with a melancholic piano that leads us to the end of this torture and ...In Eternal Embrace sinks us to the bottom of sadness with a dramatic soundscape that leaves us in an eternal void.
Ascent From The Mundane treat the longing of the fans with an onslaught of intricate technical death metal music that melted with chaotic melodies and bursts of dissonance in some parts, along with tight, heavy, complex guitar riffs, torturous and distracting vocals, bass lines. heavy, and punitive and uncompromising drum performances. Through this album they reassure us together that they are alive and still as threatening as ever, this is a great comeback.