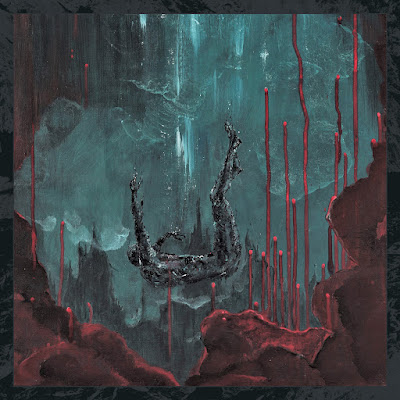 Five long years after their amazing debut album The Shrine of Primal Fire, Milan-based black metal duos A Pale December are returns and release the sophomore album is called Death Panacea that was released by Avantgarde Music on February 11th, 2022.
The album opens with Simulacrum, a track that instantly spread a fear with its somber melodies, while its sharp guitar riffs sow vicious terror with a blanket of dark atmosphere and eerie vocals. But its charming guitar solos come to give us a little hope to survive between the cruelty of the sound palette created before Iconaclasm strikes again with the eeriness of its tone, a velocity and complexity fused into one in the form of a cruel riffs, its savage vocals constantly create a sinister auras between the pounding of devastating drums. In this song they adding more progressive elements that make the composition more interesting and create a different side from the music they played before. The bursts of dark chord progressions smolder in the next track Manifesto, they pack it with a series of murky and gloomy guitar riffs, and then the ferocious vocals delivers a fear that will linger forever. A little break at the end of this song provide us a little cracks to breath before they immerse us in the cold and melancholic atmosphere of Atoning Monuments, a song that has the longest duration on the album featuring an epic and dark melody, allowing the band to explore the diversity of elements that make up own uniqueness of this song that is encapsulated in a dark sonority. Of Prophets And Blood comes to spoil us with a cold and tranquil intro before explode with a shrill of aggressive vocals that accompanied by fast and intricate guitar riffs and the drums blazing with savage tonal lines. The enchanting guitar solos and a beautiful interlude provide a little extra energy to keep us fighting against fright and truculence on this album. The album closes with Nethermost, a sinister and dreary track that exudes the darkness from its eerie musical structure with composition of bleak guitar riffs, gruesome vocals, and devastating drumming. Then its melancholic melodies and serene acoustic guitar strumming with some epic clean vocals brings us to the end of this sad journey.
Death Panacea is a form of extraordinary exploration from their musicality which remove terms of atmospheric black metal which is embedded from their debut album, this album features many progressive elements with wide melodic richness making their music more challenging and not boring. The songwriting is brilliant with the support of a clear and crispy production. It's an album that evokes our deepest emotions with anger that continues to flare from start to finish. Highly recommended for you fans of progressive black metal with an epic melody and cold atmosphere, don't miss it.