Review: Schizophrenia - Recollections Of The Insane (2022) 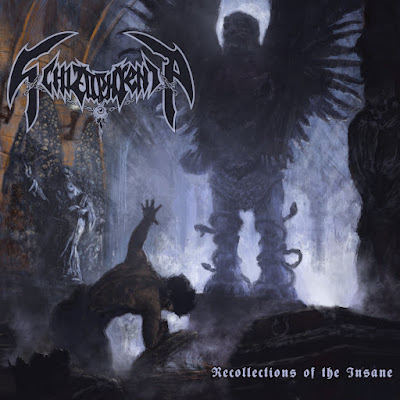 Schizophrenia just release their debut album is called Recollections Of The Insane on February 17th, 2022. If you don't know them, they are a death metal group that formed in 2016 at Antwerp, Belgium, and previously they was released their debut EP Voices in 2020.
Well, I think that's enough for the introduction because they immediately opens this album with Divine Immolation, a song that has a very aggressive composition with fast and tight guitar riffs and very dense drums, while the vocals are very straightforward giving a threat that will continue to be improved, and that's true, a sharp guitar solos come tearing us apart with such a complex structure, then Cranial Disintegration attacks aggressively with strong and hard energy, its frightening roar reveals some old school touches that are quite thick and complete with chaotic guitar solos that enter between the density of the composition. The cruel intro takes us to Sea Of ​​Sorrow, a track that spreads madness through its hypnotizing harmonies emerging from the gaps of its fast-paced arrangements, the incredible guitar solos spoiling us with its dark and melancholic melodies, before Monolith comes to make the aggressiveness emerge again. Its terrifying vocals danced together with fast guitar riffs and devastating drums, allowing the band create a havoc with its sharp guitar solos that ready to stab at any moment with a cruel melodies. Onwards To Fire, an epic and longest track on this album, allowing band create the darkest atmosphere here. While the snaking guitar solos really pounce us with its overpowering technical elements, and the song's calm outro provides some comfort before Souls Of Retribution forces us to go back to chugging a compositions with a very grainy texture, a fierce thrash beats devour us from here and there, and soaring guitar solos come to capture us with impressive beauty, then Inside The Walls Of Madness reconnects with a high aggressiveness of the fast and raw guitar riffs, while its savage vocals relentlessly venting outbursts of rage and the tearing guitar solos come to reveal sadistic technical elements with a chaotic twist. Fall Of The Damned rains down on us with sombre notes that built above a series of dark guitar riffs and gruesome vocals executed in a chaotic and insane manner, while the insanely aggressive drumming continues to berserk until the end, before Stratified Realities arrives to close the album with ruthlessness culminating in ultimate fury, and its intoxiating melody once again drags us into a hole of darkness that filled with endless torture.
Recollections Of The Insane is a very cruel album, without hesitation and doubt they torture us with fierce death metal filled with series of fast, intricate, and sharp guitar riffs. While its ferocious vocals constantly wreak a frenzy with accompaniment of devastating drum. The musical structure is very aggressive and dense, which relies on velocity and ferocity, and the stunning guitar solos always amaze us with its melodic beauty. The songwriting is very catchy with the support of an incredible production. This is a death metal album that features a lot of solid technical hints and wild thrash metal element here and there. I think this album should get more attentions.