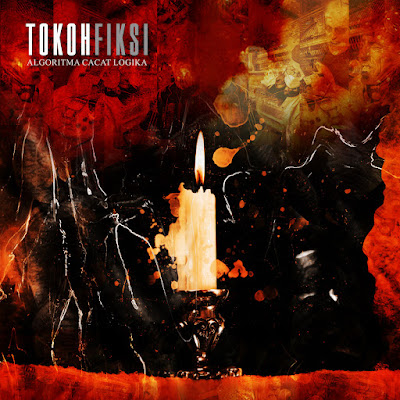 Tokoh Fiksi is a project that formed by Herry Sic in Blitar, Indonesia, they try to create their own characteristics through chaotic music composition. Curious with its musicality? You can enjoy it on their debut album is called Algoritma Cacat Logika that was released by Reprisal Promotions on February 19th, 2022.
The album opens with Trust My Logic, a track that instantly creates uncontrollable chaos, heavy guitar riffs stabing along with nasty vocals and devastating drums, but the mood melts a bit when a quirky acid jazz section pops up to drown out the erupting a turmoil, then I'm Insane comes with a goofy intro, before the chaotic section takes over again with a wacky attack of instrumentation and the structure is a complete messy. They don't seem to lose the humor side in their compositions, as appears on the track Makan Tuh Tai !, a track that unceremoniously devours us with its aggressive musical attack, where they mix a vicious death-grind with some chaotic jazz sections. NKRI Harga Mati, a track that opens with the uniqueness of acid jazz which is immediately met with indiscriminate attacks that built from a series of untidy and knotty guitar riffs, catchy bass, fast drumming, while the vocals continue to spread endless madness, then the odd jazz parts returns to the air on Fear, which dances to the brutality and chaos of its ever-increasing musical structure, and then Marauder arrives with deadly and aggressive attacks, insane guitar riffs and complicated drums alternately tormenting us with a sick tunes, before Inilah ... comes with an increasing madness through a mix of brutality and chaos that is fused with hard-to-digest jazz music. Screamed And Died, stomping with a heavy composition, featuring screwy and lunatic instrumentation, along with very barbaric vocals, and then S.H.M arrives to berserk with a series of fast, complex, and messy guitar riffs that weaved with crazy drums structure. It's Not A Dream, a track that has an unpredictable musical structure, how not when silence hits but doesn't last long the situations suddenly turns into a big mess, really unpredictable, then Algoritma Cacat Logika comes with a high level of clutter through a guitar work that featuring a weird and absurd notes, catchy bass performances, intricate drums, and really vile vocals. Utopian, this is the longest track on the album, its duration far exceeds that of the other songs, allowing band to create madness, chaos, and destruction with all their all power. The track also re-awakens an eccentric jazz part with a wild attack of brutal death metal, before Bajingan Elegan comes to close the album with silliness, chaos, and cruelty that melting into the ultimate attack that explodes with brutality which will torture until the end.
Algoritma Cacat Logika is a wacky and eccentric debut album, featuring a wild mix of brutal death metal, grindcore, experimental, and acid jazz. The musical structure is weird, messy, and unpredictable, that built on chaotic and intricate guitar riffs, unique bass, aggressive drums, and vicious vocals. The material presented is really hard-to-digest that will make the listeners dehydrate to brain cramps. So, if you need something crazy and out of the ordinary, this album for you.