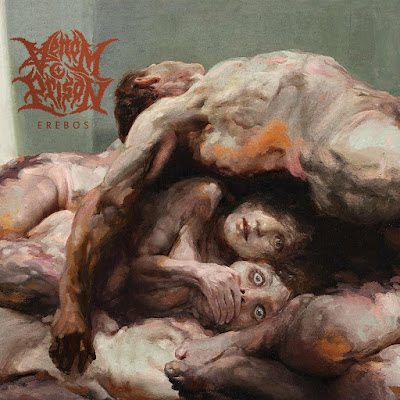 Erebos is the third album of UK Death metal squad Venom Prison, this is one of my anticipated album this year. I'm dig with their second album Samsara that drop in 2019 and I was enjoyed with their 2020's compilation album Primeval, and of course got their new album is a perfect joy for me. Erebos was released by Century Media Records on February 4th, 2022.

The album opens with Born From Chaos, a short composition that starting a turmoil with a slashing melody accompanied by furious vocals that lead us in the next track Judges Of The Underworld, striking with powerful hardcore beats fused into a series of heavy riffs, straightforward vocals, and drums that hit hard, as well as a soaring guitar solo that seems to provide a cracks to further increase the level of aggressiveness, then Nemesis came to bring about even more chaos with his tight guitar riffs, savage vocals, and thundering bass. I also find some dissonance part in the structure of this song and the torturous melody further increases the level of its cruelty. Comfort Of Complicity, a track that offer a beauty melodies through its heart-touching solos and a series of crispy guitar riffs, solid vocals, and energetic drums, and Pain Of Oizys submerge us into the softness of its structure with clean vocal bandages giving a serenity in this song, then slowly exploding as the vocals transition to more vicious until control us completely. Golden Apples Of The Hesperides, a song with a fast and aggressive structure, a crushing hardcore rhythm blends with a straightforward death metal styles that blends with heavy guitar riffs, furious vocals, and intense drumming that strikes with stomping beats, then a very chaotic solos executes us at the end of this song, next track Castigated In Steel And Concrete comes with a series of intoxicating melodies accompanied by cruchy guitar riffs, incredible vocals, and aggressive drums. The composition is very solid with a very fun structure, really a very interesting song. Gorgon Sisters strike with high aggressiveness and velocity, the fury exploding with terrifying vocals, powerful guitar riffs, heavy bass, and devastating drums, creating a harmonizing frenzy that pierces straight to the core, then Veil Of Night takes us into a dark nuances before striking, the most aggressive parts are fused with indulgent melodies create an exciting and seductive harmonies. The album closed with Technologies Of Death with wreak all the rage all to the final plus all those complementary influences, the band provides a parade of fast riffs that decorate throughout the song and poured into a hypnotic melody, this is an extraordinary offering to give a very climactic satisfaction to the listener before the album ends.

Erebos is an improvisation of the previous album, where this album brings more piercing, hypnotizing, intoxicating, and soaring melodies. The guitar riffs are heavy, crunchy, tasty, and dense, the vocals are solid and powerful, the bass are thundering, and the drums are devastating, also the songwriting is brilliant with very tight production. If you know them you will get a different sensation from the previous album and if you don't know them just listen to their music and swallow it, because this is an album that is very addictive with all its compositions.