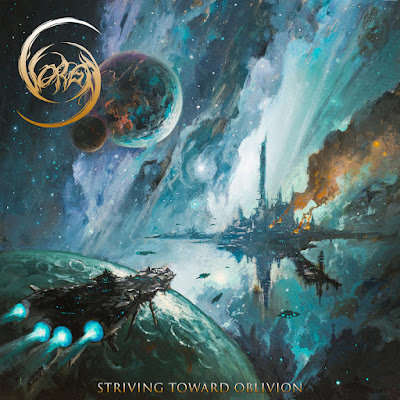 Vorga is black metal group that formed in 2016 at Karlsruhe, Germany, the band have released an EP at 2019, an finally they drop the debut album is called Striving Toward Oblivion via Transcending Obscurity Records on February 4th, 2022.

Starless Sky opens the album with fast and aggressive riffs, melodic strains echoing throughout the song, furious vocals, and drums intensely delivering a crushing blow. A beautiful transition in the middle of the song creates a silence that fuels more anger to continue to burn, and the rage continues on the next track Comet with a rhythm that is so intoxicating, the terrible howl of the vocals creates an eerie atmosphere that accompanies a series of dark and gloomy guitar riffs, and the beautiful melody and harmonics take us to the next track Disgust, a song with a weighty composition, strike with a more aggressive tone that wrapped with a chilling atmosphere and a truly hypnotic melody that will spoil us from the beginning until the end of this song, but don't get carried away by it, because Stars My Destination came with its colder melodies, which drown us even more with the softness of its riffs that create a melancholic and haunting atmosphere. The next track we are faced with Last Transmission, a song that has a very beautiful harmonization and melody, along with a blazing guitar riff, great bass performance, very attractive drums, and vocals that roar very powerfully, making a way to restore again an aggressiveness that loaded in the track Fool's Paradise, this track is heavier and more intricate in terms of tone selection, the guitar riff is also very passionate that accompanies the outburst of anger from the vocals that continue to howl with cruelty. Taken reconnects with his fast and straightforward guitar riffs, his horrifying vocal roars wonderfully mingled with the oppressive and crushing drum rhythms that deliver an eternal mess. And it's time for the ending song Death Manifesting to take on its role to finish this album with a very strong melody, solid vocals, and a very heavy guitar riff that doesn't losing its cruel and dark side. This song also leads us to the end of this dark journey filled with emotion that keep smoldering forever.

Striving Toward Oblivion is an extraordinary black metal album with hypnotic, melancholic, and haunting melodies, that creating a cruelty and fear which always grows with the accompaniment of fast, aggressive, and sometimes dark and gloomy guitar riffs. The vocals are vicious and terrifying which is amplified with crushing drums. This is a great form of band's expression, which offers us highly addictive music with impeccable songwriting and excellent production. A great Black metal albums that you must include in your collection list, highly recommended.