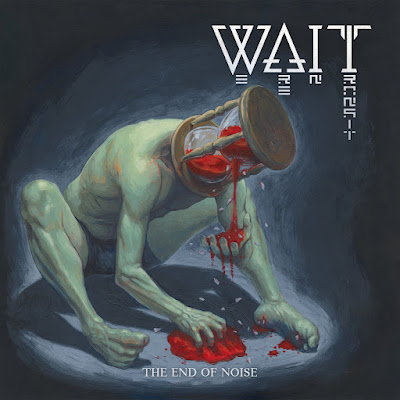 WAIT (We Are In Transit) is a progressive death metal project that formed in 2011 at Baltimore, Maryland. This project featuring member of Exist, Malignancy, ex-Defeated Sanity, ex-Obscura. Their debut EP We Are In Transit (2019) is really awesome, so to follow up their succesful of EP in this year they release a debut album is called The End Of Noise which was released by The Artisan Era on February 11th, 2022.
The album opens with Half Funeral, an extraordinary instrument show that featuring a sensational guitar performances, dense polyrhythmic drums, and excellent bass , then clean vocals emerge at the end of the song to embellish the track. Everything is executed with great craftmanship of each player to produce a fantastic composition, then Earth's Last Orbit strikes with the density of its musical structure consisting of thick and complex guitar riffs, heavy bass, and drums with intricate tempos. While the vocals claim their place with a fitting mix of superbly clean vocals and insanely solid growls, then an incredible guitar solo takes on its role to immerse us in the ultimate in beauty. Lone Presence Supreme stomps with a series of dense progressive riffs, maybe we can call it a djent, but this is very different from the djent we often hear, the tone selection is very weird but on the other side it sounds more interesting. While its vocals carry a lot of emotions that express feelings of sadness, loneliness, frustration, and then his screams are in stark contrast to its anger. The next song, Reverie, indulges us with its more passionate structure with unique and strange voices, then its melancholic melodies touches the heart and mind with very charming clean vocal bandages, while its very attractive drums continue to accompany us with its outstanding beats, while I Climb Downhill explodes with intense aggressiveness, its hoarse vocals delivers an intense fear with haunting melodies, there's a little break for us to breathe halfway through the song before its vocal screams rekindle the deepest fury which takes us into even more terrifying nuances. The End Of Noise specifically spotligths of their overall performance, while simultaneously dissonant and jazzy also contribute to the uniqueness and beauty of this song that dance together between a strong progressive and an enchanting melody. It's an amazing track that deserves more credit before Until The Road Is Closed comes to close this album with a very solid musical density, they also add a lot of musical character to this song, then a passionate guitar solo ends this extraordinary journey with a climax satisfaction and great memories that will be remembered forever.
The End Of Noise is a fantastic debut album, they penetrated not only on the highest levels of progressive death metal but also of the progressive metal scene. The album features tight, complex, and heavy guitar riffs, the bass performances are excellent, the drums have an intricate and dense structure, and the placement of the vocal combinations is dazzling and harmonious. The songwriting is clever and brilliant with an unpredictable structure that supported by incredible craftmanship from each member, and the production is outstanding. Don't sleep with this stuff, as they offer a very invigorating form of death metal, you should check this one out.