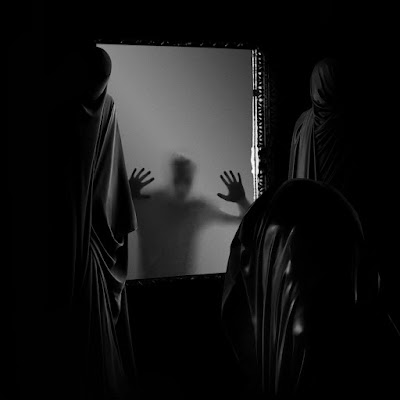 Aeviterne is a Dissonant death metal band that formed on New York, this band has an EP entitled Sireless (2018) which got a good response, to follow up that EP they was released a debut album is called The Ailing Facade on March 18th, 2022 via Profound Lore Records. Surely, this album really surprising me.
Well, Denature opens this album with great enthusiasm, bursts of dissonant immediately spewed out by the band along with dense and thick riffs, solid vocals, and tight drums. Slowly its music turns eerie as dark notes are woven with smoldering aggressiveness, then Still The Hollows Sway follows with a heavy structure, the thumping of drums blazing incessantly torturing us with its cruelty, while the vicious guitar riffs continue to gnaw at us with madness above the ever-shrouding darkness, that revealing evil black metal element that imbued with wider energy, before Penitent came up with more aggressive, darker compositions that provided agonizing oppression, dismaying guitar riffs were launched along with horrific vocals. In this track they managed to knit complexity, darkness, and cruelty into deadly ammunition to destroy us all at once. The Reeking Suns, a song that delovers a burst of vile dissonance wrapped in ruthless technicality. This track is like designed to create madness with explosive anger that evokes hatred that will continue to gnaw at our conscience until the end, then The Gaunt Sky hits with a terrible punch, a violent dissonant vibrations echo with ruthless technicality and then explodes with such massive power, this song has a chaotic structure with abstract patterns and is performed in a dark form. Obeyance, a song that goes in a more experimental direction, its musical structure is disturbing and really hard to digest as it is filled with a series of somber and murky guitar riffs that evoke an ominous and worrying atmosphere, followed by The Ailing Facade, an instrumental song that spews thick darkness filled with heavy dissonance that woven into a chaotic experimental structure, then a quiet break appears at the end of the song that connects us to the track Dream In Lines which closes this album with an interesting dissonance, the structure is more accessible and digestible, this song also displays a sharp technicality and is composed with the right dose to produce a heady rhythm. This is the track that has the longest duration compared to the others, which is my favorite on this album.
The Ailing Facade is a debut album that plunges listeners into a room filled with fear, anxiety, and unease through their musicality, which combines death metal with black metal, technical, and dissonant elements which is brought into a more experimental direction. The songwriting is unique and engaging with an unexpected, unfriendly, and ominous structure that conjured into a disturbing complexity. This is one of the debut albums that I have been waiting for for a long time, where previously they had captured my heart through the EP that was released a few years ago, yes this is worth listening to.