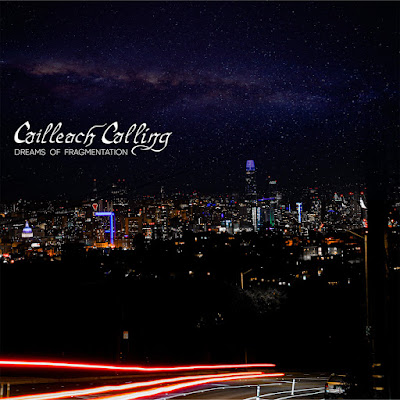 Cailleach Calling is a black metal project that formed by Chelsea Murphy and Tony Thomas (Dawn Of Ouroboros) alongside with Yurii Kononov (ex-White Ward) in 2021 at Oakland, California. They was released the debut album is called Dreams Of Fragmentation on March 11th, 2022 via Debemur Morti Productions.
The album opens with Phosphenic Array, a song that has a catchy texture, where the explosive beats intensely strike along with eerie howls of vocals, crunchy guitar riffs, and a few strings as well as subtle synths that move in the background to become a force in itself. This song is also coated with a dark ambient that surrounds every side of this track that I think its sound unique and exciting, then Bound By Neon comes offering a lovely black metal track with a frosty atmosphere and a dark ambient synth section that is the soul of this song with an incredible progressive foundation. Meanwhile, its guitar work delivers a melancholy melody on top of its fiery vocal screams as if to express all its anger in this song. Cascading Waves, the longest track that become the core of this album. The synth's dramatic and cinematic sound fuses with the chilly atmosphere which is met with a prologue from the vocalist that evokes a serene atmosphere for meditation, before the dark melodies mingle with the wonderfully clean vocals that slowly lead us to sad music then explode with a boom of torturous drumming along with terrifying vocals and alarming guitar riffs. The song also reveals a dark dissonance with a roots of strong post metal and progressive elements. This song is designed to take listeners to a faraway place with a poignant nuances. The album concludes with Mercurial Invasion, a more violent and aggressively structured track, built on a series of somber guitar riffs, dreary synths, sinister vocals, and devastating drums. This song accompanies us to the end of a worrisome journey where anger, sadness, and cruelty are the main ingredients of this entire album.
Dreams Of Fragmentation is a unique and interesting offering from this project to introduce their identity in the metal music scene. Musically, the band delivers a fun black metal music with a combination of elements such as progressive, melodic, and post metal. This album emphasizes the dark ambient and cold atmosphere with a melancholic, dramatic, and cinematic soundscape. The songwriting is beautiful with the great production. This is a black metal album that designed to take its listeners to a distant dimension with a feeling of sadness, anger, and disappointment that lingers until the end. An album that worth to checking out and enjoying, need more attentions and apreciations.