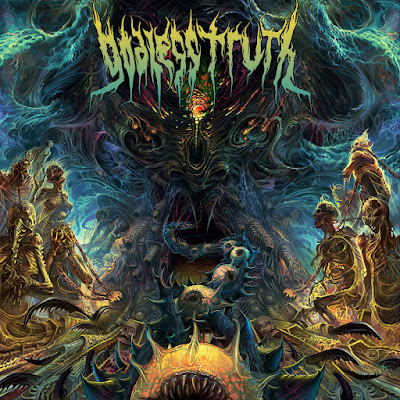 After a long slumber, Czech technical death metal troop Godless Truth is back to drop the self-titled album which will be released by Transcending Obscurity Records on March 4th, 2022. This is their fifth album and a follow-up their EP Too Late to Stop My Hate (2010).
The album opens with Wheels Of Entity, a melodious and melancholic introduction that accompanies us to the track The Decision, which immediately explodes with ruthless technical attacks, sharp and intricate guitar riffs that alternately torture us mercilessly along with intense blast beats and very solid vocals, while its charming guitar solo comes to hypnotize us with its melodic softness, then Glory To Desperation, a melodic introduction that leads us to the next track Scissors, a song that has a solid composition featuring tight guitar riffs, dense drums, and great vocals, all coming together to create a majestic sonority, then the old-school guitar solos cames to grind us with its chaotic sound. They continue its aggression with Breathe Fire, a fast-tempos track that delivers a string of sharp and heavy guitars, devastating drums, powerful bass, and terrible vocals. It's like their tantrums that have been buried for a long time, waiting for the right moment to be vented, then Fortune Time came to anesthetize us with a heady melody, that built on catchy and complex guitar riffs, superb bass performances, solid drums, and fierce vocals. In the same way with the previous track they delivered Bred In Greed, a song that has a heavy and dense composition, featuring a incisive guitar riffs that constantly stab us along with a piercing guitar solos that executes in a vicious way, then The Eyechain torments us with a barrage of fast, heavy, and violent guitar riffs, allowing the band to unleash a fury that will continue to flare up, while its jaw-dropping guitar solos seem to provide a strong hint towards RIP Cage, a song that has a more accessible structure, delivering melancholy guitar solos and angry vocals that evoke a dramatic nuances that will continue to develop, before the poignant keyboard closes the track in the void. The album closes with Wake Up To Obey, this is a song that has a sharp, fast, complex and tight structure. Everything is executed very skillfully into a solid composition, that provide a bridge to lead us into the end of a challenging and memorable adventure on this album.
This self-titled album is a wonderful album that mark them still alive until this moment. The compositions is getting much catchier and powerful than ever before in my opinion. The technicality is so fast, tight, incisive, and complex, that having roots in the old school sound, the melodies is memorabe, enchanting, and menacing. The songwriting is more effective and fresh than before. Overall, this band have something tasteful and delightful that will offered to you, really recommended if you need an unrelentless technical death metal stuffs.