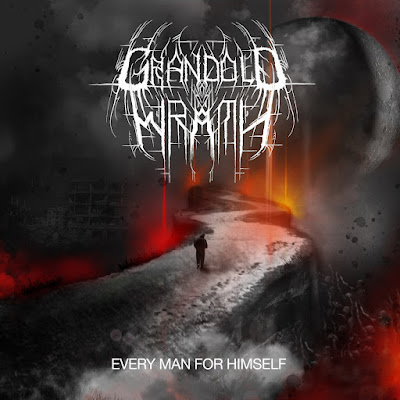 Grand Old Wrath is German technical death metal band that formed in 2017 at Nördlingen, Bavaria. This band return with debut album is called Every Man For Himself that was released on March 31st, 2022.
Alien Grinder opens this album very aggressively, a barrage of fast and dense guitar riffs melt into beautiful tech-death strains with a lilting melody, then a dark break emerges to give a breath before the music stomping again with fierce vocal accompaniment, then Prime Delivery comes with a seductive rhythm, opened with a sexy bass performances, this song moves by maximizing attractive guitar riffs, energetic vocals, and powerful drums, while the stunning guitar solo comes to pierce us with its immersive melody. Odium Doctrine, a song that dances with an intoxicating rhythm, where they masterfully showcase a series of beautiful notes that are conjured into a deadly attack through a parade of incisive and tight guitar riffs, heavy bass, and thunderous drums, along with ferocious vocals that constantly spread the madness, followed by King Of The Weak which unleashes the toxic sting from the wobble of a ruthless tech-death that fuses with the swirling melody and is amplified with a brilliant progressive twist. Its astonishing guitar solo really plunges us to the bottom of the abyss of misery and leaves us helpless in the midst of the onslaught of music that continues to torture, then Giant who has a heavy and thick structure comes to bring massive destruction through a very anesthetizing composition, its complex and sweeping guitar riffs alternately hypnotize us to helplessness, then the astonishing part of the guitar solo performances increasingly stab us to the end with an incisive melody, while an immersive sampling opens the track Every Man For Himself which is followed by a series of sharp and twisty guitar riffs mixed together with a soft melody, then the dazzling guitar solos arrives to indulges and lulls us with a heady rhythm, before Hallucinogenic strikes with an aggressive beat, they weave fast and intricate guitar riffs with thick bass, and energetic drums. Meanwhile, its evil vocals never stop spreading a furor with strong hooks and anchored in growing cruelty. The album closes with Erasing Degenartion, a song that has superpowers formed from a velocity, complexity, beauty, and cruelty that are fused into a solid composition. And then its astounding guitar solos come to wrap us in sharp technicality and fantastical melodies, then usher us towards the end of a journey full of fun twists and turns.
Every Man For Himself is an album so astounding, invigorating, and riveting. They provide a ruthless technical death metal performance fused with a lilting and swirling melody, also fantastic progressive twist. This album is filled with complex, sharp, and dense guitar riffs, superb bass performances, energetic drums, and powerful vocals. While the guitar solo that is presented is really stabbing and wrenching heart also mind at the same time. The songwriting is aggressive with outstanding production. For those of you fans of tech-death metal, you must check this album and I think it will be the best choice for you.