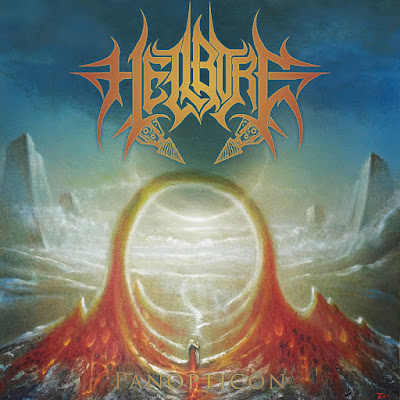 Hellbore is an International technical death metal band featuring Charlie Munro and Chris Whitby, they have released an EP on 2019 entitled Holy Sadist that get more appreciation from death metal lovers in the world. To follow up on what they have achieved, in this year they are return and release a debut album is called Panopticon on March 18th, 2022.
Libertus, a melancholic introduction opens this album in a dramatic way before All Men Are Created Evil stomping with high aggressiveness, featuring sharp and dense guitar riffs, tight bass, and very solid drums along with powerful vocals, this song has a very heavy structure that combines fast technicals with captivating melodies, while the jaw-dropping guitar solos came to anesthetize us with fantastic notes, then Angel Slayer strikes with more weighty music, sending out a barrage of severe riffage that composed with fierce vocals and dense drumming, and then a twisty melody slips in between the devastating music rhythm that allowing the band to create a heavy sonority. Terror Eyes reawakens a melancholy feel before exploding with great force, the track gushes out a vicious aggressiveness then fades in a catchy section and culminates again when a terrifying howl of vocals arrives that followed by a heady lead section and heavy bass performance before rekindling frightness which will continue to haunt until the end, then Necrocracy hits with a very heavy beat that is interwoven with complex technicalities along with cruel vocals and devastating drums creating a real torture and making noise, they also include some unique sampling in the background arrangement which is enough to bring a mystical feel to this composition. Panopticon I: The Pretence Of Balance, a track that opens with a very epic and jarring sampling, before turning into a blind attack through a series of heavy and dense riffs with very strong drum accompaniment. This is the longest song on this album where they will do everything in their power to create an unbearable cruelty, behind the onslaught of barbaric music they also insert some unique orchestration and sampling that is quite catch my attention. While, its snaking guitar solo becomes a best part to rest when the torture has reached its peak, then Panopticon II: Born To Bleed greets with a dramatic soundscape then moves to a heavier realm with a balsting drum like a bomb ready to destroy anything, then a deadly missile is released through a series of sharp technical riffs ready to take aim at anything in front of it, before Panopticon III: The Tyrant's Throne arrives to close the album with its beautiful melodic flowing quietly with charming technical passages and melted with solid vocals and dense drums, then slowly moves to bring us to the end of a journey full of satisfaction.
Panopticon is a very complex and heavy album that engraved in a dazzling technical death metal composition, where they masterfully showcase their skills that formed in sharp and dense guitar riffs, powerful vocals, incredible bass, and thunderous drum performances. The songwriting is excellent that supported with thick production. It's an album that has a strong musical structure with great dynamics and a beautiful melody packaged in a menacing technical death metal form. Highly recommended to checked and hopefully won't be missed.