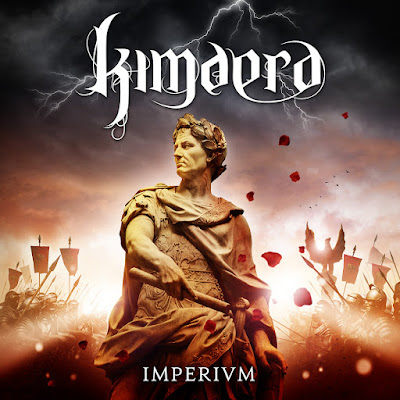 Kimaera is Symphonic death metal band that formed in 2000 at Beirut, Lebanon. This band are return with new album is called Imperivm that was released on March 15th, 2022. This is their fourth album on their career and follow up The Harbinger Of Doom (2013).
The album opens with De Amare Et Bellvm, a track that has a dense and heavy structure with a lovely middle-eastern elements melted together with a magnificent symphonic composition that produces an epic combination with a thick progressive foundation. While the incredible female vocals collided with the frightening vocal growl that became something of interest here, then The Die Is Cast came with a series of dense guitar riffs that blended with the strains of a great orchestra that accompanying every beauty in this song, I also caught some unique synth parts that appear in the background of the arrangement, before the charming guitar solo spoils us with the softness of the melody that penetrates to the end. VVV became one of the longer songs, allowing the entirety of their instruments to be used. Featuring musical styles that range from death metal to melodies and an amazing mix of the two with a strong progressive twist. What I love about this track is the incredible orchestral parts, evoking a melancholic and dramatic atmospheric to the amazing female soprano vocals, that revealing the hidden strengths of the band and then conjuring it up into a very solid composition, moving on to the next track The Ides Of March, a song that evokes deep fury through a series of dark guitar riffs, terrifying vocals, and torturous drumming that assaults us ruthlessly, before gorgeous keyboard performances and indulgent guitar solos arrive to deliver a tranquility and a little gap for us to breathe above the destruction that was made. A majestic intro opens the track Imperator, then built into an attack that bombards us with heavier compositions and then descends into a melancholic keyboard section evoking a feeling of deep sadness and merges into an astonishing guitar solo before returning to a denser realm that resonant until the end, then a cinematic introduction walking to Vi Divina who then steps in with high aggressiveness featuring a mix of captivating melodies and winding progressive parts that lead to a biting guitar solo that wrapped in a touch of luxurious symphony provide a glorious satisfactions, before Capvt Mvndi arrive with the splendor of the symphonic and orchestra that move featuring many influences, such as Middle-Eastern, melodic death metal, doom metal, and progressive which were fused into a very interesting death metal form. This is the longest track on the album which allows the band to put all their creativity into producing a very sumptuous composition. The album closes with Ya Beirut that featuring guest vocals Cheryl Khayrallah who performs this song so gracefully and captivatingly providing a conciliatory serenity before a solid growls of male-vocals unites with her and shares the place to lead us in an awesome ending.
Imperivm is a very captivating album, they combine the splendor of symphony and orchestra with a variety of influences, such as middle-eastern, doom metal, and melodic death metal which are based on a strong progressive foundation and a bleak atmospheric gust, then everything are fused into an excellent death metal form. The songwriting is unique and brilliant with marvellous production. This is an album that not only conveys an eeriness but also highlights a beauty that will continue to spoil us as this album moves. It's a great comeback from this band to offer something better than before.