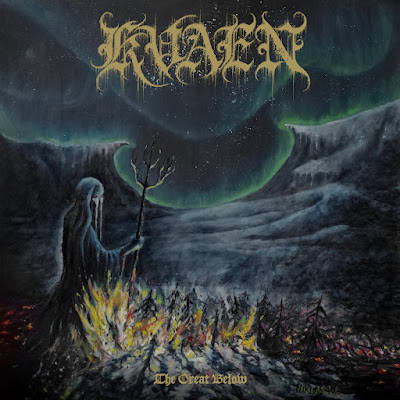 Kvaen is a melodic black metal project that formed by Jakob Björnfot on 2019 at Kalix, Norrbotten, Sweden. After successful with their debut album The Funeral Pyre in 2020, the band continued their aggression by releasing a second album is called The Great Below on March 25th, 2022 via Black Lion Records.
The album opens with Cauldron Of Plagues, a frosty track with a captivating structure that tame the cruelty of Black Metal with strong Pagan/Folk metal influences. Its fantastic guitar roars fused with an energetic rhythm that creates some sweet, soft and intoxicating harmonics, then The Great Below comes next with a threatening and interesting composition. The tracks are very aggressive, offering a sharp musical structure with a series of fast and heavy guitar riffs, energetic vocals, and solid drums serving as the basis for the piercing parts and letting the parade of captivating guitar solos take over to spoil us to the end, while In Silence offers us a breaks moment with a worrying intro. The haunting rhythm comes next before revealing its rage along with terrifying vocals, vicious and dark guitar riffs, as well as torturous drum parts. Slowly this track moves towards a very melancholic part where the slashing guitar solo reveals itself with a pathetic melody to drown us in pain. Damnations Jaw offers a desolate and poignant rhythm, where solid and majestic leads will give way to offering an epic guitar solo that perfectly embeds itself in a worrisome atmosphere, while Sulphur Fire reveals old School flavors with a raw texture, where effective patterns combined with great dynamics and harmonics that provide a large hole through which a stunning guitar solo freely enter to capture us with its soaring melodic beauty, before letting Ensamvarg come to blow us away with the structures created. The contrast between the majestic elements and the shrill notes becomes quickly captivating, as the sharp guitar lead imfiltrate on the viciousness and ferocity of this track before anchoring to its majestic closing with a dazzling guitar solo, while Your Mighty Has Fallen arrive to feature a mysterious dissonance and a ruthless part of technicality. The structure and texture of the music is so aggressive which hypnotizes us with a menacing melody, then viciously drags us to the track The Fire Within Him Burns, a track that close this album dramatically, where the band vents all their unstoppable anger into a vicious composition. The song is like an unbearable tornados with astonishing guitar solos revealing the intricate and beautiful parts of its musical structure, then the melancholic keyboard lets the sound fade into emptiness and sadness.
The Great Below is an amazing show, where they are able to melt the anger and cruelty of black metal by melting various metal elements, such as pagan, folk, thrash, speed, and even melodic death metal which are conjured and executed with a sharp, epic, and beautiful structure. This album features so many invigorating, intoxicating, astonishing, and enchanting guitar solos that never cease to lull and spoil us. The songwriting is brilliant and more mature than ever. I think this album is the next level of the band which is able to surpass the beauty and majesty of their previous debut album, an album that is very much worth consuming. It's a great masterpiece for me.