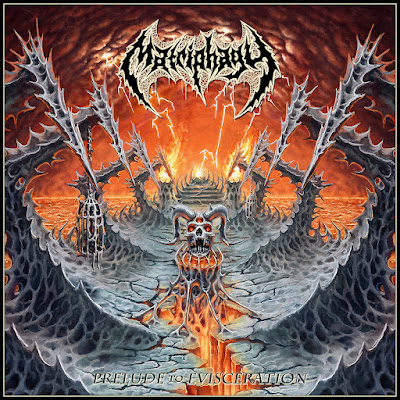 Matriphagy is a death metal band that formed in 2016 at Boston, Massachusetts. This band just release debut EP is called Prelude To Evisceration on March 18th, 2022.
The EP opens with Matriphagy, a title taken from the band's own name. This song immediately stomp with a very dense structure, presenting death metal music that is fused with various elements, starting with the savage brutality that hits every moment, continuing to transition to complex directions when the slashing guitar solo comes to reveal the ruthless technical side, and then literally slowly this track anchored to a heavy slamming form to the end, followed by The Epitome Of Disgust, which drove with high aggressiveness. It's like a fusion of velocity, ferocity, and intricacity into a ferocious form, the track is built on a series of fast and incisive guitar riffs, powerful vocals, superb bass performances, and thunderous drums. This is a song that can destroy your ear-hole instantly with the brutality they create, then the rapid roar of guitars accompanies Skulking Monstrosity who comes to stab us with its sharp guitar riffs, while the disgusting vocals incessantly spread madness along with the energetic drums. Without further ado, this track directly attack and torments us mercilessly, before Paroxysm arrived offering a captivating guitar solo, then greeted with fierce vocals and very heavy drums. This band still maintains its aggressiveness in every track that is spewed out, it feels like there is no room for us to breathe at all. Legacy Of Infidelity, another song that has a dense and heavy composition, the structure is really chaotic so it's not easy to guess where this song is moving, the tempo changes are amazing, and all executed quickly and straightforwardly, what an interesting track, and Katabasis close this EP with savage force, they bring all the madness, complexity, brutality and chaos taht vomited into a lethal threat. The aggressiveness continues to increase until this song stops echoing and leads us to the end of the cruel oppression.
Prelude To Evisceration is an amazing offering from this band that brought death metal with many variations of elements, such as brutal death metal, vile technical touches, and heavy slamming beats. The musical structure is very dense and aggressive, which is built from a series of fast, complex, and incisive guitar riffs, disgusting vocals, great bass performances, and very energetic drums. The songwriting is very thick with great production. It's short album but delivers maximum satisfaction. Highly recommended for you fans of heavy and intricate death metal music.