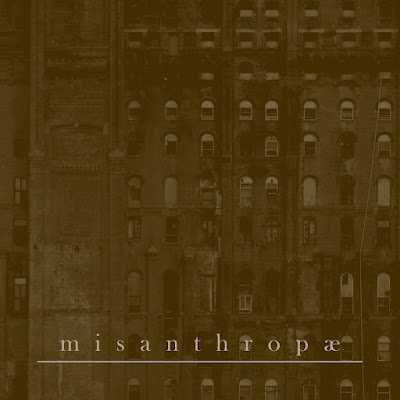 Misanthropæ is a project that formed in 2021 at New York, this project was released self titled EP on 2021 and debut album Untitled on February 18th, 2022.
This album has an uniqueness in the selection of song titles, all the title are same only distinguished from the number sequence. Well, Reason I opens the album with a very horror feel, a gust of darkness immediately strikes along with a frightening howl of vocals, and the music becomes even more tense when the burst of bleak dissonance sneak between the relentless pounding of the drums, then Reason II greets with a very gloomy dissonance, bringing darkness that increasingly envelops every wall of sound, then a haunting melody comes to spread the fear that will continue to accompany til the end. Reason III, a song that opens with a leaden intro that plunges us into deep pangs of sorrow, before howls of vicious vocals stomping along with somber and gloomy guitar riffs, punishing drums, and insanely fierce vocals strike with evil energy, while Reason IV came with high aggressiveness and heavy composition, featuring a series of sinister guitar riffs, horrific vocals, and devastating drums. This track also constantly terrorizes us with worrying dissonance. Reason V releases a gripping energy that reveals the strong black metal elements, fright and cruelty are the soul of this track. They also give us a little break for us to breathe for a moment before the terrifying howl comes back bringing the horror that continues to peak and explode with the crazy power of the instrumentation presented, then Reason VI creeps up from the ruination to sow atrocities that will torture and destroy us with an oppressive composition that built of fast and sharp guitar riffs, ferocious vocals, and intense drums that shrouded with menacing dissonance and melodies. Reason VII, a track that has a strong dark energy with a dense structure, a barrage of thick guitar riffs constantly attacks us with savage vocals and powerful drums, while cimmerian dissonance dances behind its ominous rhythm. The album closes with Reason VIII, this is the culmination of their pent-up anger and then spewed out in the form of vicious guitar roars, terrifying vocals, and devastating drums. With cruelty and chaos, this song accompanies us towards the end of a journey full of painful torture.
Untitled is a very threatening and oppressive album, the musical structure is downright ruthless featuring the perfect marriage of blackened death metal with dark dissonance, along with its chaotic and somber guitar riffs, terrifying vocals, and overly aggressive drumming. All of them are so evilly executed that they produce a gloomy angle in their own style. An album that worth checking out and deserve more atentions.