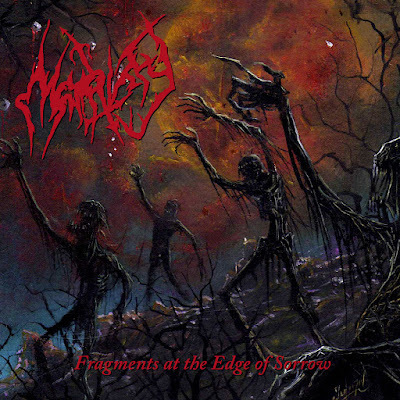 Mortify is a death metal group that formed in 2013 at Concepción, Bio Bio, Chile. This band was released their sophomore album is called Fragments At The Edge Of Sorrow via Chaos Records on March 25th, 2022.
The album begins with Beneath The Emptiness, a song that opens with a dark soundscape that evokes a sense of horror, then spreads to a dark progressive direction. The guitar riffs that are displayed are so catchy that they blend with savage vocals and torturous drums, before the song drifts into a more sinister direction that marked by a heady guitar solo, followed by In The Amorphous Path which moves at a slow tempo bringing a lingering torture and creates an eternal misery, then the tempo slowly begins to heat up with aggressive beats accompanied by a series of dark guitar riffs and superb bass performances, while the dazzling guitar solos present a haunting and threatening tones that echo to the end, then Ethereal Illusion Of Psyche stinging with a strong old school progressive death metal flavor, this song has a solid and heavy structure built with series of sharp and murky guitar riffs, powerful vocals, beautiful bass, and energetic drums. This track is executed ferociously which creates an eerie atmosphere that surrounds when this song resonates, before Fragments drowns us with a mysterious and worrying soundscape that became the connector bridge to the next song Frayed Lunacy (Dying Sight), a song that stomping with a strong beat and a heady rhythm. Its structure is fast and aggressive that threaten to create pure destruction, really killer song, then Mindloss came with a heavy and tight structure, this is an instrumental song that sends a catchy mix of various death metal elements, such as progressive, old school, and technical that are mixed with the right portion. This song also conveys a dark atmosphere, when a somber melody covers every side of its arrangement, while The Accursed And The Throes emerges between a density of reverberating music, its rhythm is truly hypnotizing with a series of rough and dark guitar riffs, attractive bass, and passionate drums, that sticking out to create a weighty sonority, then greeted by Edge, a cool and calming interludes that gives us a chance to breathe with the accompaniment of melancholic guitar strumming that really drowns, before Astral Sphere From A Bleeding Soul stomping with intense aggressiveness bringing massive destruction created by the destructive beats blending in with the disturbingly complex notes, while the twisty guitar solos are here to create an uneasy feeling that will linger until the very end. Process In A Secrecies Of Thoughts, a fantastic song born of fast and energetic guitar riffs, great bass, and solid drums, along with terrifying vocals, this song shoots fast like a bullet fired to shoot its target with intense energy, then a catchy bass solo open Contaminated Echoes, a song that moves at high speed with a lethal beat, while its tight guitar riffs come together with a menacing melody and a strong progressive and old school foundation, allowing the band to create endless cruelty, before the album closes with Sorrow, a melancholic and dramatic keyboard composition that brings a poignancy and leaves us to the void.
Fragments At The Edge Of Sorrow is a conceptual album that invites listeners to take an impressive journey through the various parts of the sound, it's a cruel amalgamation of progressive death metal with a strong old school taste and a menacing melody. The musical structure is dense and heavy that blends with powerful beats and heady rhythms. The songwriting is attractive and aggressive featuring superb instrumentation along with energetic vocals. This album shows the power, intricaty, and poignancy in every corner that is executed in an extraordinary manner, which will create a memorable listening experience. An album that shouldn't be missed.