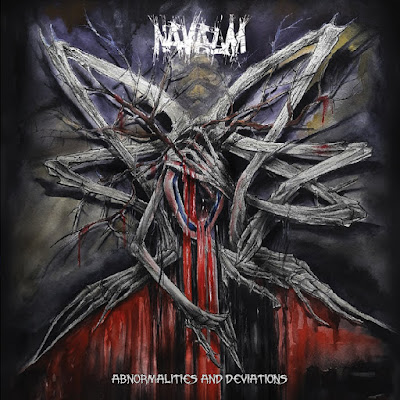 The Ukranian group Navalm seems to never run out of ideas in writing songs, it is evident from their productivity in releasing albums every year, this is not an easy job and of course it takes harder work to do it. This year they continues their work with release the ninth studio album is called Abnormalities And Deviations that was released by Careless Records on March 4th, 2022
Hell Of Neglect opens the album with a heavy beat, then strong vocals accompany the rhythm of the music that continues to rock with catchy guitar riffs, and the astonishing solo comes with an intoxicating melody and drive us into Deadly Doubts, a track that opens with a sweet intro that provide a calm, then the music creeps into a more enchanting direction that filled with crisp and crunchy guitar riffs, they also put on an amazing bass performance, before the tremendous guitar solos lull us further with a hypnotic melody. Frozen Crypt Of The Unholy Ones is arrives to bring a strong old-school influence, its music structure is more easy listening and accessible to all fans, there is nothing stands out so much in the arrangement until the soaring guitar solo comes to give a memorable ending, then Crude Oil Wars continues its old school attack but this time is formulated more menacing with a strong progressive foundation, this song also has a varied structure and more colorful arrangement that features heavy guitar riffs, solid vocals, and dense drums with several sharp guitar leads that decorating its composition. Deliver Me From Evil, a track that opens with a catchy bass performances then berserk along with ripping guitar riffs, while its energetic vocals make this song move more aggressively with intense drumming accompaniment, then the vicious guitar solos alternately torment us with blazing melody, while Mental Abnormalities unveils its dark side through the gloomy melodies and allows the band to create a somber sonority that continues haunting til the end, then its gripping outro close this song with an eeriness and leads us to Lightbringer, an incisive track that reawakens their aggressiveness with a more challenging and threatening structure, this is built from a series of thick and dense guitar riffs, powerful vocals, beautiful bass, and energetic drums. This is an arrangement that doesn't just rely on density and speed, but also has a strong complexity. The album concludes with Subdimensional Metaphysical Hornets, a weighty composition featuring heavy and tight guitar riffs, powerful vocals, and devastating drums. It's their final threat that allows the band to concentrate an attacks with all their ultimate prowess, and then an incredible guitar solo comes along to provoke us with its sharp melodies, and provide a straightforward closing of this album.
Abnormalities And Deviations is an album that presents a superb combination between progressive death metal and old school death metal that assembled with dense and thick guitar riffs, solid vocals, excellent bass, and energetic drums. In this album we are also spoiled with stunning guitar solos with its hypnotizing and intoxicating melodies. The songwriting is quite straightforward and has a good production. This is definitely an album that worth checking out.