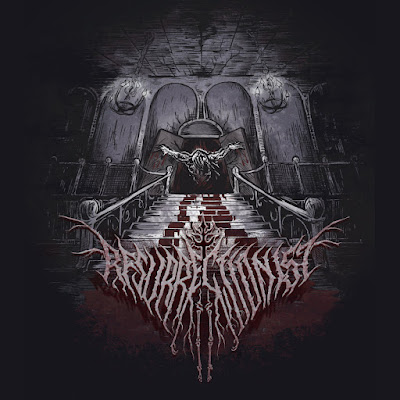 Resurrectionist is Symphonic black metal project that formed by Christopher J. Cozzi on Los Angeles, California. This band was released self-titled debut album on March 11th, 2022.
A Tale Painted Crimson begins this album with a majestic and thunderous symphony in a luxurious orchestra bandages, its beautiful music featuring a melancholy and dramatic soundscape that melted into a terrifying black metal composition. While its eerie vocals incessantly delivers a haunting fear, then Brasov 1898 carves beauty on a majestic symphony with a magnificent structure, while its amazing guitar work shrouded in a melancholy melody becomes a romantic fondling that we get here, besides that an excellent bass performance also comes to give the extra power on this song. The poignant strings play opens The Resurrectionist, followed by the thumping of the blaring drums into a rumbling start at the beginning of the track, before howls of furious vocals strike with a pathetic symphonic accompaniment, evoking a sense of horror that developing until the end, followed by Minotaur that arrive to slice our hearts with its grievous symphony, then slashing melodies dance on the sorrow that produced by the sorrowful tunes. The structure is heavy and somber that ignites the flames of fury in the midst of a horrific musical onslaught. Somnambular Form Possession, a song that has a solid and somber texture that built on a series of dark guitar riffs and devastating drums, along with fierce vocals that continue to jolt with all the rage and emotion bubbling over, then Chimera comes with an epic intro that gives a little serenity, before the music stomping again with a heavy structure, presenting dense and aggressive guitar riffs, but does not eliminate the dark and terrible side that contained in this song. Abigail, a very epic song that born from a series of melancholy melodies, dramatic symphonies, and magnificent orchestras that are fused with catchy guitar riffs along with ghastly vocals that continue to reverberate until the end, and the album closes with Vrykolakas, a track that opened by a pathetic keyboard and a heartbreaking cello, before a regal symphony and orchestral section takes over the entire track. This is the longest track in the song that allows the band to express all the emotions, anger, and sadness that have been provoked from the start and then exploded with terrifying power, and at the end leaving us with misery and fear that will continue to haunt us.
This is a wonderful debut album, they present black metal music that shrouded with symphonic and orchestra that are grand, majestic, marvellous, luxurious, and bombastic along with an epic, melancholy, and dramatic melodies. The compositions and textures very widely, featuring a series of pathetic guitar riffs, excellent bass, poignant keyboards, heartbreaking cellos, solid drums, and horrific vocals. The production is incredible that full of great dynamics. This is an album that can evoke emotion, anger, and sadness at the same time. Highly recommended.