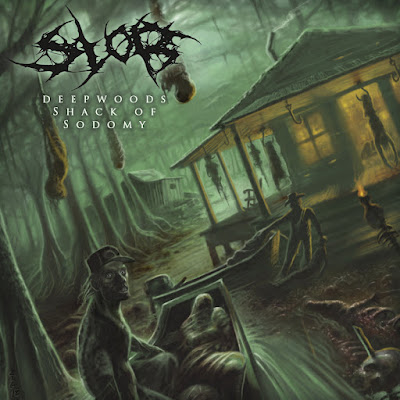 The British Brutal death metal duos Slob just released the debut album is called Deepwoods Shack Of Sodomy on March 4th, 2022 via Comatose Music. The band was formed by Ross Honour and James Murphy in 2013, and this album being their first introduction to the metal music scene.
The album opens with Intro (Sodomy In The Swamps) which offers us a worrying introduction depicting a deviant sexual cruelty that happening around us and also leads us to the next track Squeal Like A Pig, a song that has a very heavy structure built on sharp guitar riffs. which is able to tear our ears in a short time, while its fierce vocals support the violence of the music presented. This song adopts a lot of old school elements and some slam beats that melt into a crushing rhythm, then Deepwoods Shack Of Sodomy follows with a savage attack, offering some fast palm-muted that wrapped in a lethal structure, heavy vocals unceasingly gnaw at us mercilessly, while incisive guitar solos emerge from the sidelines of the crash to punish us before a dirty sampling makes the fear of violence and torture reappear. Hogtied And Sodomized, a track that has a fast and powerful structure that formed from a series of violent and sharp guitar riffs that contain a vile technicality elements, which are released to create a massive chaos that will continue to spread in all corners, while the Alligator Death Roll comes with a high level of aggressiveness, combining intoxicating rhythms and cruel harmonies into agonizing compositions. This song becomes a connector and creates a wave of violence that will continue to reverb until the end, before Wrong Turn arrives to destroy us with wild brutality that dances together with heavy slam beats and sharp technical touches became a malicious weapon to drop us onto the atrocity's floor that will continue to be trampled on with violence. The album closes with Pitchfork Puncture Wounds, this is the longest track on this album which is the peak of their enormity, this song has a ferocious structure that strike with a barrage of fast, sharp, and heavy guitar riffs along with sadistic vocals, dense bass, and crushing drums. And the wild and cruel sound-sampling leaves us in a truculence and torturous situation that will haunt us every moment.
Deepwoods Shack Of Sodomy is an album that depicts the violence and cruelty that is around us which is presented in the form of a savage brutal death metal, they also fuse some elements such as technical, slam, and old school into its composition to become a perfect crushing machine, featuring a barrage of fast, sharp, heavy, and thick guitar riffs along with ferocious vocals, solid bass, devastating drums, and some wild sound-sampling. The production is quite dense with the right sound selection. This is an album that deserves to be checked, especially for you fans of heavy brutal death metal.